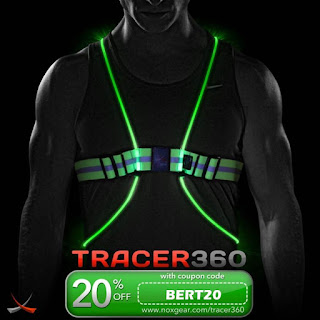 There is a large group of athletes who receive little attention in our sports crazed world, and I've been one of them for more than thirty-six years.

Actually, I'm not talking about practitioners of a particular sport but rather athletes who practice their sport at a particular time - nighttime.

In 1979, I lived in Laurel, Mississippi, where I was the managing partner of an auto dealership.  A good portion of my day was spent smoking and worrying about the less than healthy state of the auto industry and, in particular, my dealership.  On July 1st, my Office Manager, who also smoked while worrying about our financial situation, suffered a heart attack that a few days later took her life.  We were the same age.  That woke me up.  Just after dark, on July 6th, 1979, I flipped my last ever cigarette into the gutter and hop-stepped into my first run.

Now, thirty-six years later, I still run.  I run about the same distance as I was running in 1980, 35 - 40 miles a week, only I'm slower than I was in those marathon days.  My conservative guess is that I've run well over 30,000 miles and almost every mile of it has been run at night.  I've had falls, near misses, and a couple of not-near-not-misses.

Early on, I discovered the need for a flashlight and, ever since making that discovery, I've been equipped with the smallest, brightest one available.  But that isn't always enough to alert motorists to my presence.  I've had to dive off the road more times than I can count and, as I alluded to in the previous paragraph, I've been brushed twice by cars, both events were accompanied by shouts of "Sorry, I didn't see you."

Thanks to Simon Curran, Tom Walters, and Sarah Fredley, I'm convinced I'll never hear that statement again.  Simon and Tom invented the Tracer360, the ultimate safety device for us nocturnal athletics, and their associate, Sarah Fredley, got me fitted with the right size in amazingly quick time.

Simon and Tom didn't invent the Tracer360 for me - they just got tired of running into each other as they played with their Frisbee in the dark, but I knew when I spotted a Tracer360 in my local running store that they had, in fact, invented it for me.  Without so much as looking twice at the box, which was clearly marked with a large "S," I headed for the house and waited for the sun to go down.  It finally did, and I strapped on my Tracer360, idly thinking as I did, that it would have been nice if they had made it a bit larger

Seven miles later, still marveling at the fact that drivers saw and avoided me and still thinking it would help if it were a bit larger, I noticed the "S" on the package.  I emailed the help department with my sad story and got a faster than light response from Sarah Fredley.  I've never dealt with a more efficient customer service rep, and in 72 years, I've dealt with quite a few.  Within a hour, my new M/L belt was on the way to me.

I emailed Sarah to ask her if it would be alright if I wrote a blog about my Tracer360.  She wrote YES! so emphatically, I swear I heard it.  Then she added,

"We would love to go ahead and extend a discount to your followers. Use: BERT20 on our site (www.noxgear.com) in order to save 20% on the Tracer360 or the Tracer360+! Please feel free to include that in your blog as well! I have attached a graphic for you if you would like to use it! I went ahead and made the discount good through October 31st, so hopefully some more people can benefit from the Tracer!"

So, if you are a Nocturnal Athlete of any sort and would like to be seen, here is your chance to make that happen.

Oh yes, watch the video to see the Tracer360 in action.  Be patient, it takes me a while to show up, I'm not as fast as I once was - until I get there, enjoy Elvis' entrance music.

And, be safe running, skate boarding, Frisbee flying, bicycling, water skiing,  bungee jumping, or what ever sport you practice at night.