This post was originally published in March 2015.  I posted a total of 5 Divine Moment Posts - you can find them all by searching Divine Moment in the search box in the right column. 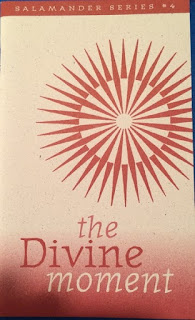 This post is just a brief update on the status of the mission along with enough information for you to Google a point or two and maybe amuse yourself for while.
Or, if you're on a similar mission, you might want to spend a bit more time following the points I'm about to lay down.
This is not a religious statement because I'm not religious, not any more.  I was born into a religious family which lived in a religious part of the world.  For a time, I wanted to be a missionary and for a number of years I was a minister.  For a long time, a lot of people told me I had made a difference in their lives, and for a while I actually believed them.  Then I got it that I can't make more of a difference in anyone's life than they are willing to have a difference made there.  I pondered that and realized that if a person wants a change, they will find a way to do it whether I'm there or not.  That was a big relief, because I'm on a mission, and it's not about making a difference in anyone's life but mine.
The Mission is simple.  I want to know God, or Allah, or Jehovah, or The One, or  whatever you choose to call the force that created all that is.  There's never been a doubt in my mind that my mission is doable, and I know I'm getting closer to my objective.  There have been many wrong turns, a lot of misinformation, and a number of false prophets, still I've made a lot of progress, though I can't quantify that for you in any way other than a statement of knowing that it is so.
The booklet I'm going to tell you about in a moment speaks more eloquently to that situation:
A mark of progress
at one stage
is an obstacle at the next.
You cannot note when
(or how much)
you have progressed toward
any liberation...
only discern your limitations
less and less.
Without a guide, mentor, or teacher, I've had to rely on books.  I just did some quick, conservative, calculations on the number of books I've read, which doesn't include The Bible (which I've read through a number of times) or all of the versions of The Tao I've read (one I've copied by hand three times), and here's what I've concluded:  In fifty years of reading, twenty esoteric books per year, with an average of 50,000 words per book, I've read fifty million words.
The irony of that is that everything I've read and studied, EVERYTHING, is covered in great detail in The Divine Moment, a 900 word booklet written by Pama Rab Sel (James Lane Prior - born in Deland, Florida in 1928 - died in Kathmandu, Nepal in 1990.)  Though I never met Pama Rab Sel, I've walked and talked and laughed with him since we met in a bookstore in Huntington Beach, California in 1993.
The Divine Moment is long out of print, however, if you want to chase a used copy here's gone now to the only one I found on the web - it gives the pertinent search info.
I'm thinking about blogging about the key points in Pama Rab Sel's amazing work, mostly for my gratification.  You're more than welcome to follow along and add comments - or not.
The Divine Moment begins this way -
This moment is it.
There is no "better" moment
than this one.
Later I'll tell you how it ends.
- October 25, 2019 3 comments: