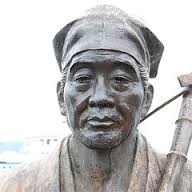 "Every day is a journey,
And the journey itself is home."
Matsuo Basho

Basho speaks to me of things that matter - to him and to me.  For example, last night, with the ease of one for whom timelessness is only another aspect of Oneness, he dropped in and without preamble said:

"But when all has been said, I am not really the kind who is so completely enamored of solitude that he must hide every trace of himself away in the mountains and wilds.  It's just that, troubled by frequent illness and weary with dealing with people, I've come to dislike society.  Again and again I think of the mistakes I've made in my clumsiness over the course of the years.  There was a time when I envied those who had government offices or impressive domains, and on another occasion I considered entering the precincts of the Buddha and the teaching room of the patriarchs.  Instead, I've worn out my body in journeys that are aimless as the winds and clouds and expended my feelings on flowers and birds.  But somehow I've been able to make a living this way, and so in the end, unskilled and talentless as I am I give myself wholly to this one concern, poetry. Po Chu-i worked so hard at it that he almost ruined his five vital organs, and Tu Fu grew lean and emaciated because of it.  As far as intelligence or the quality of our writings go, I can never compare to such men.  And yet we all in the end live, do we not, in a phantom dwelling?
But enough of that - I'm off to bed."

All I said was, "Good night my friend.  Sleep well."

There was nothing else to say.
Bert Carson

Leaving Home Depot, I spotted a man about my age.

Pretty damn old I thought then amended the thought to include, just like me.

He was wearing a Vietnam Veteran's baseball cap, so I walked over and started the conversation in the usual way.  "When were you there?"

Still seated behind the wheel of the gleaming silver, Ford, long bed, four-wheel drive, crew cab pickup, he raised his head and said, "66 and 67.  I was with the 173rd Airborne Brigade.  You?"

As he opened the door of the massive pickup truck he tried to smile but it was too painful to manage, twisted and crippled the way he was.

I stood clear of the door, not offering to help, because we both knew I couldn't.  Finally he was out of the vehicle, standing, less-than-solidly with the help of a polished silver walking stick.

Our eyes locked for a long moment, everything that needed to be said passed in silence.  Then he nodded curtly, and I returned the gesture.

I stood a long time in the silence he had left behind, watching as he made his way slowly toward the store, noting that he had not mentioned the embroidered line of script on the bottom edge of his cap.  It read, "SILVER STAR WINNER."

I broke my stare, letting the parking lot full of unaware people flood back into consciousness. I knew he hadn't mentioned it because we both understood what it meant. Our knowing was enough.

The Silver Star Medal is the United States' THIRD HIGHEST award exclusively for combat valor, and ranks fifth in the precedence of military awards behind the Medal of Honor, the Crosses (DSC/NC/AFC), the Defense Distinguished Service Medal (awarded by DOD), and the Distinguished Service Medals of the various branches of service. It is the highest award for combat valor that is NOT unique to any specific branch; it has been bestowed by the Army, Navy, Marine Corps, Air Force, Coast Guard, and Merchant Marines. It may be given by any one of the individual services to not only their own members, but to members of other branches of service, foreign allies, and even to civilians for "gallantry in action" in support of combat missions of the United States military.
Because the Silver Star is ONLY awarded for combat valor, the only devices worn on it are:
Bert Carson