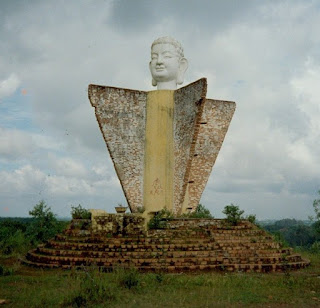 Since I served in Vietnam in 1967 - 1968, about five lifetimes ago, I've returned twice.  First, alone, on what was going to be trip with a number of Vietnam Vet friends who, one by one, for various reasons, dropped out, until I was the only one left on the list.

I remember as we took off from Bankok that this was probably a Viet Cong trick to get me back in the country and like most VC tricks it had worked.

At luggage claim in Saigon I got it that this wasn't a VC trick.  The large room was crowded, not with tourist, this was before the day of tourist going to Vietnam.  There was me, standing about six inches above almost everyone else, and there was a room full of Vietnamese returning home.

I was working my way toward the baggage train that had just arrived when someone shouted, "American, American, American."  I raised my head to see who had caused all the commotiona and did a double take when I saw everyone was looking at me.  Before I could take a breath the entire group began applauding, laughing and cheering and I flashed back to the night I arrived at that airport the first time.

Far away from the terminal the 200 plus of us, all first timers in Vietnam, were unloaded from the plane and herded to Japanese made, diesel powered buses, all equipted with heavy wire mesh windows.  The Sergeant assigned to my bus explained the mesh was keep Viet Cong hand grenades outside.  Then he added, "They may get you son, but it won't be on my watch."

Welcome to Vietnam, I thought.