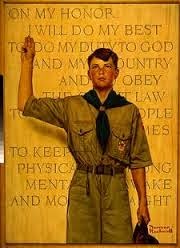 It all started like this.  At 4 AM, on September 9, 1942, I was dragged into this world, slapped on the ass, and while I was screaming from the shock of that rude reception, I heard someone tell someone else, "It's a boy."

No one whispered to me, "Its going to be alright.  Just close your eyes and take a nap and we'll explain everything later."

Though no one told me a thing over the next couple of years, they  talked about me enough for me to figure out that I was a boy, that I had two parents, though as far as I was concerned that was hearsay, since one of them was on a submarine, somewhere on the other side of the world,  fighting men he didn't know, over something I didn't understand nor was I even sure I wanted to understand.

Later, after I'd pretty much figured out who this group of strangers was and who they thought I was to them, they packaged me with a group of kids like me and sent us to a place where we were to be further indoctrinated in the rules of this organization that, as near as I could tell, had kidnapped us from wherever in the universe we had been residing.

Our indoctrination began with daily recitations of something called the Pledge of Allegiance.  Every day, while standing at attention, we said:

I pledge allegiance to the Flag of the United States of America, and to the Republic for which it stands, one Nation under God, indivisible, with liberty and justice for all.


Sometime later, the boys and girls were divided into separate groups. I don’t know what the girls did, but I remember well what the boys did. We stood at attention and repeated the Boy Scout Oath, which went like this:

On my honor I will do my best
To do my duty to God and my country
and to obey the Scout Law:
To help other people at all times:
To keep myself physically strong, mentally awake, and morally straight.

With that bit of indoctrination behind me, I now knew I was not only a boy, and a member of particular clan of humans, I was also a Boy Scout committed to helping other people at all times.

I finished my formal schooling, married a woman I'd met in one of the schools I attended, got a job in a city near the one my parents had bought me to when I was thirteen years old, and the two of us began doing what we had been taught to do:  Going to work, going to church, going to bed, waking up, and doing it all over again.

A couple of years later I once again stood at attention and repeated another pledge.  This one went like this:

The bottom line of that one was, I found myself involved in a war with men I didn't know, in a country I'd never heard of, halfway around the world.

Now, seventy-one years later, I have a new pledge, one that I wrote and I'm pleased to report that its working out a whole lot better for me than the other three did.

If you would like to know what it is, e-mail me at bertcarson@earthlink.net and I'll tell you.