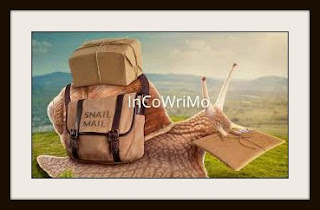 Six years ago, actually six years and a month ago, I first heard the name InCoWriMo for the first time.

InCoWriMo means International Correspondence Writing Month.   The month is February and the objective is "...to send a handwritten letter every day for the month of February to a person on the list.  It doesn't have to be a novel or even news, it's entirely up to you what you write."

The key word in that quote, taken from a blog post on the InCoWriMo 2019 site, is handwritten.  The snail mail logo is more than a cute picture.  It is reminder to slow down, reach out and get in touch.  I don't know of a better way to do that than write a letter - a handwritten letter.

I began writing letters fifty years ago when I served in Vietnam.  When I first read about InCoWriMo, I jumped at the chance to get back into it.  I quickly discovered that the magic was still there.

The first month of the first InCoWriMo, February 2014, was half done

when I heard about it.  I thought about waiting to 2015 to participate, but decided it was too good to wait a year for, so I jumped in and caught up.  I haven't missed a year since.

Many of the people I've met through letters have become my good friends, and I expect many more will.  I have pen friends in Thailand, the United Kingdom, Canada, Netherlands, Taiwan, and the United States.

I just assembled my 2019 InCoWriMo mailing list, and it includes individuals in Germany, France, Hong Kong, Israel, Macau, Kuwait, India, Mexico and the U.S.  All of the information for this year's event is here.   If you don't know whom to write to, a list of individuals who would love to hear from you is here.

"Letter writing is the only device for combining solitude with good company."  Lord Byron