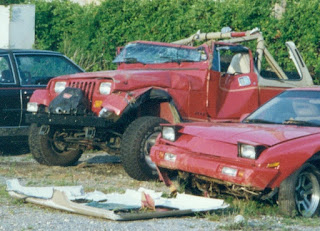 In mid-July, 1995, a dog crossed a highway in north Alabama.   The dog, a medium sized, black, female, with no pedigreed ancestors in her lineage, had been exploring the five acre patch of woods that bordered the southern side of the highway near her home.  Her empty stomach told her it was time to go home and see if her food dish had been refilled since she had emptied it earlier in the day.
The highway the dog crossed is a federal highway designated by the Department of Transportation, as U.S.  Highway 11.  Most of the construction of the highway occurred between 1926 and 1929.  From its northern most point, the U.S.-Canadian border in upstate New York, it travels 1,645 miles, ending near New Orleans, Louisiana, after passing through seven states.  One of the states that U.S. Highway 11 passes through is Alabama.  Just before leaving Alabama and winding into Tennessee, it travels through Fort Payne, Alabama, the county seat of DeKalb County, and its largest town.
Fort Payne sprawls across a valley formed by Sand Mountain on the south and Lookout Mountain on the North.  In 1995, I lived in Mentone, Alabama, a hamlet perched on the northern edge of Lookout Mountain.  I had lived there for eleven years, with my partner.  Our business was professional speaking.   In our arena, we were well known and always in demand.  Our speaking engagements took us from one side of the continent to the other.  Generally, we were on the road three to five days a week.  The days at home were consumed by wrap-up tasks from the previous trip and preparation for the next one.
The day the dog crossed the highway, I was traveling south on U.S. 11, heading back to the house after picking up dry cleaning.  The last traffic light of Fort Payne was fading in my rearview mirror as I eased my Jeep up to 65 miles per hour.  I topped a low rise and glanced ahead.  The only vehicle in sight was a UPS delivery truck heading toward me and the UPS terminal in Fort Payne.  I thought about the upcoming trip, turned on the radio, took my left hand off the steering wheel and moved my right hand to the two-o’clock position.
At that moment, the black dog, totally focused on food and home, moving faster by the second, popped out of the waist high weeds on the south side of the road, and ran directly in front of my Jeep.  I swerved hard left, missed the dog, and then swerved hard right to get back on the highway.  The Jeep, which I had recently equipped with a 4” lift kit, wasn’t up for the maneuver.  I did get back on the asphalt, but I was upside down and spinning slowly when I arrived.  The Jeep and I were a sitting duck for the truck, which struck the driver’s side door (note the dent).  That was more than the hard top could handle (that’s the flat beige object lying on the ground in front of the jeep), so it detached itself from the vehicle and took me with it: that’s right, I wasn’t wearing my seat belt, which is why I lived to tell the story.
The UPS driver, an acquaintance of mine, lost his kneecap.  Thanks to rehabilitation, he learned to walk without a limp.  He took medical retirement from UPS and opened a café in Fort Payne.  It has prospered since the day he opened it.  In fact, the last time I was there, he was in the midst of his second expansion.
The dog was fine, and I understand she sat by the road for a couple of days before resuming her normal routine.  I’ve always believed she was waiting for the show to come back to town.
As for me, I broke my back and seven ribs.  I wore a body cast for three months, during which time my ex discovered that she could handle the travel and our speaking engagements very well without me.  I discovered that a relationship that works all the time, not just the moments when I was on stage, was more important to me than anything else.
A year after the dog crossed U.S. Highway 11, I pulled onto it in my new Jeep and drove a few miles south and then turned left on Interstate 59 and headed west.  Three days later, I met Christina Bell, my friend, and pen pal, at the Missoula, Montana, International Airport, because I didn’t want to spend two more days without her beside me.  We left the Red Lion Inn the following day and drove west, toward Vancouver, B.C., where we rented a U-Haul trailer to carry all of her things.  Then it was “eastbound and down,” heading back to Alabama.  Today, Christina and I share an office, a house, and a life.  We’re heading toward our fifteenth wedding anniversary, and the rest of our lives together, due in large part to a dog that crossed the road.
That dog also connected you and me.  You see, I wouldn’t be writing this if the dog hadn’t headed home when she did and you would be doing something else in this moment.  Now, if you’ll take a few seconds, relax, and let my story sink in, you’ll realize that we’ve always been connected.  The dog that crossed the highway simply introduced us.
- January 28, 2012