Fourth and Forever - You Decide 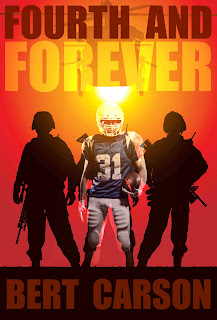 Fourth and Forever is a love story about Josh Edwards, his wife Kathy, and their son Bobby.

Fourth and Forever is the story of a Vietnam Vet coping with loss while keeping a commitment to his son.

The Kindle Book Review gave it five stars and said “From the first page to the last, Bert Carson's FOURTH AND FOREVER not only paints a picture of the best things in life (family, hope, love, integrity), he paints with artful accuracy, a canvas that spans the Vietnam War, loss of love, football, and the bonds between a father and son. Bravo!”

Joyce Faulner, President, Military Writers Society of America, and Award-winning author of In the Shadow of Suribachi & Username gave it five stars and said "'Fourth and Forever' has sports in it--and Vietnam. But it's not about sports or Vietnam. It's an inspirational foray into resilience."

R.S. Guthrie gave it five stars and said, “The author manages to weave together a father's past, a son's future, a veteran's burden, and a college football team's destiny into a wonderful, heartfelt tale for the ages.”

Stephen Charme, a top ranked Amazon Reviewer gave Fourth and Forever two stars and summed up his comments by saying it is, “Mediocre and superficial…”  Along the way he questioned the integrity of those who gave it five stars.