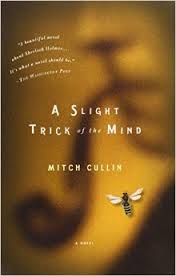 A Slight Trick of the Mind by Mitch Cullin, is the book on which the recently released movie, Mr. Holmes, was based.   I've read the book and seen the movie and my comprehensive, albeit short, review is simple.  They are both great.  And, my advice is, read the book before you see the movie.  You'll know why after you have done both.

If you have to do one or the other but can't do both, as much as I love Ian McKellen, my advice is, read the book.  It will last longer and you can carry it with you and, as you will discover, Mitch Cullin is a marvelous writer.

Here's a passage from the book to beef up my argument for the book:

"Not through the dogmas of archaic doctrines will you gain your greatest understandings, but, rather, through the continued evolution of Science, and through your keen observations of the natural environment beyond your windows.  To comprehend yourself truly, which is also to comprehend the world truly, you needn't look any father than at what abounds with life around you - the blossoming meadow, the untrodden woodlands.  Without this as mankind's overriding objective, I don't foresee an age of actual enlightenment ever arriving."

Those words are spoken by the 93 year old Sherlock Holmes to his young friend, Roger Munro.

When I read the passage, I stopped and copied it into my notebook because it is such a beautiful way of restating one of my favorite lines from The Divine Moment, this one:


"A mark of progress
at one stage
is an obstacle at the next."

Holmes' message to Roger is a great one to use to emphasize what we all must overcome to move successfully through this portion of our evolution as life forms, a process that began eons before we made our appearance on this minor planet, in a mediocre constellation, parked in an obscure corner of the universe, an evolution that will continue long past the time we leave this place on our way to the next.

The guidance we receive in a given moment, no matter how useful or profound, will only serve for a finite period of time and must be released, without regret or hesitation, the moment it no longer serves.

Few of us are willing to release the things that worked so well in the past.  We cling to them long past their point of usefulness.

Which brings to mind another passage from an old favorite, Illusions - the Adventures of a Reluctant Messiah, by Richard Bach:

"Once there lived a village of creatures along the bottom of a great crystal river.  The current of the river swept silently over them all - young and old, rich and poor, good and evil, the current going its own way, knowing only its own crystal self.  Each creature in its own manner clung tightly to the twigs and rocks of the river bottom, for clinging was their way of life, and resisting the current was what each had learned from birth.  But one creature said at last, 'I am tired of clinging.  Though I cannot see it with my eyes, I trust that the current knows where it is going.  I shall let go, and let take me where it will.  Clinging, I shall die of boredom.

The other creatures laughed and said, 'Fool! Let go, and that current you worship will throw you tumbled and smashed across the rocks, and you will die quicker than boredom!'  But the one heeded them not, and taking a breath did let go, and at once was tumbled and smashed by the current across the rocks.  Yet in time, as the creature refused to cling again, the current lifted him free from the bottom, and he was bruised and hurt no more."

The longer you've clung to the teachings that brought you to this place, the tougher it will be to turn loose.  No matter.  Of this you can be sure.  If you have the courage to turn loose, the river will lift you to the surface.