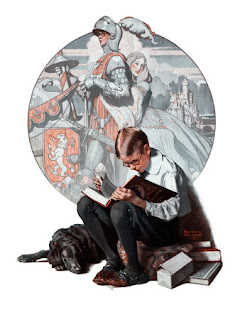 This is the seventh consecutive day that I've posted a blog - that's a first for me, and whatever number of consecutive days of blogging is in second place, isn't even close.

Nothing has changed in me - it's the Norman Rockwell paintings that have kept me blogging every day.  They bring back so many memories that finding something to write about isn't an issue.  If there is an issue using Rockwell's work to illustrate a blog, it's keeping the post to a reasonable length.

For example, when I look at this painting, immediately I think of my first dog, Peck, lying beside me, patiently waiting for me to emerge from a book that had lured me away from the world of friends, and games, and parks, and rolling in green grass.  What a dog.  I could tell you a lot of stories about Peck.

But before I can focus on a single Peck story, I glance at the painting again and immediately I think of Miss Rey, my elementary school librarian, and the most beautiful women I'd met in my first ten years.  She taught me the Dewey Decimal system, and let me work in the library after school, and on more occasions than she would have ever imagined, caused me to run into walls.  That finally became so painful, I determined not to think of her while I was walking or running.  I could tell you a lot of stories about the time I spent working in Miss Rey's library.

But before I could focus on a single Miss Rey story, the book the boy is reading catches my eye, and immediately I think of the summer morning I was was riding to the public library, a place where I spent almost as much time as I spent fishing in the Cahaba River, a shallow, swift-running stream, that passed along the eastern edge of my home town.  The basket mounted on the handlebars of my bike was filled with books, which was always the case.  For some reason which was lost forever in the subsequent crash, I decided it would be a good time to practice riding with no hands while resting both feet on the handlebars.  The next thing I remembered was crawling around the street, picking up the books that had scattered in the one-boy bicycle disaster.

Tonight, sixty plus years later, I finger the scar, hidden by my right eyebrow, and experience a flashback to that day - to my childhood - to Peck - to Miss Rey, and finally to books.  Books, not tablets, or iPads, Kindles, or Nooks, iPod's  or the host of electronic games that are moving out of Target, WalMart, BestBuy, and Amazon Distribution Centers in records numbers this Christmas season.

I grew up in the day of books and nothing else.  That means I'm old.  It means that when I speak to young clerks, hired for the Christmas rush, they speak LOUDLY, and slowly, and patronizingly, for as long as they can keep their attention focused on me - which, more often than not, isn't long enough for me to complain about their volume, or rate of speech.  Fortunately, growing up in the age of books, means more than being old.  It means I learned to finish the story.

You see, no matter how technically advanced the diversion is, it is limited by the parameters installed by the programmers who built it.  Not so with books.  When I read (or write) a book, the only limits I have are the limits of my own imagination, and my imagination, like your imagination, has no limits. It has no binary constraints.  It doesn't need to be within range of a hotspot to operate, nor does it require a password, or a monthly maintenance fee.  My imagination has no limitation on the amount of data it can upload or down load, and it doesn't require automatic updates or reboots.

I look at this illustration, which Norman Rockwell called The Age of Romance, and realize how lucky I am to have been raised in the age of books.  I'm not sure I could have survived in another age, and I'm glad I didn't have to try.

Tomorrow number eight in the Norman Rockwell series of blogs.  It is called Daddy King and I'll illustrate it with this Rockwell painting: 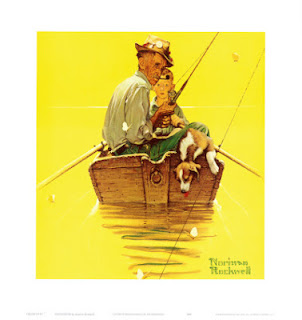