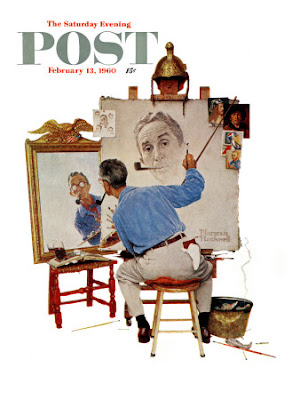 Yesterday, (Sunday 12/16/12) I posted a blog that I called Author’s Oath.  Since I discussed the Boy Scout Oath, I decided to locate a picture that depicted a Boy Scout repeating the scout oath.

On my first search attempt for the right graphic, I found Norman Rockwell’s painting.  Obviously he painted it just for my blog.  So, I downloaded it.
I posted the blog, tweaked the site theme a bit, since I haven’t used that particular blog in a while, and then I sat back and took a look.  Rockwell’s painting reached out and grabbed me.  At first, I thought it was the new black background that had drawn my attention.  Then, I realized it wasn’t the background, or my words, but rather the painting.  So I hiked back to the art.com, the site where I found the picture, and began browsing through the Norman Rockwell section.

By the time I went through nine pages of Rockwell’s work, I had selected seventeen more paintings to illustrate blogs, or to be more specific, seventeen of his paintings immediately brought back memories that I intend to blog about in the next seventeen days.  I thought it fitting that the first of the series should be a blog about Rockwell.
This is what art.com has posted about him:

Norman Rockwell (1894 – 1978) is celebrated
as "the Dickens of the paintbrush". His warm and often humorous images captured a unique vision of Americana. In addition to story illustrations, advertising campaigns, posters, calendars and books, Rockwell's paintings were showcased on the cover of the Saturday Evening Post for more than forty years. In 1957 the United States Chamber of Commerce cited Rockwell as a Great Living American, saying: "Through the magic of your talent, the folks next door – their gentle sorrows, their modest joys – have enriched our own lives and given us new insight into our countrymen."

What it could have added was:


Since it didn’t say that, I just did, and this is the first
of my Norman Rockwell blog series– it’s called, simply, Norman Rockwell.  I hope you enjoy the series.

Tomorrow’s post will be called Almost Christmas.  I’ve illustrated it with this Rockwell Painting: 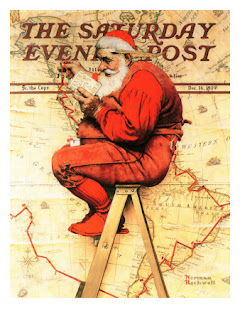