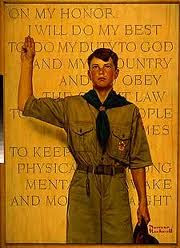 At age thirteen, after five years as a Boy Scout, the illusive rank of Eagle was in my sights, when, on the way home from a weekly scout meeting I asked my father, “What does ‘moderation in all things is fine,’ mean?”
My question got an unexpected response.  Daddy slammed on the brakes and in half a second, our 1953 Ford sedan came to a jarring halt at the curb.
As dust swirled around the still, softly moaning, car, Daddy turned toward me, and with great effort to keep emotion out of his voice, slowly said, “Say that again, Son.”
I repeated my question.  He thought about it for a moment, turned back toward the road, dropped the car into first gear, slowly engaged the clutch, and with no more discussion we drove home in silence.
The next day Daddy told me I was no longer a Boy Scout, but added that he would help me complete the requirements for the four merit badges standing between me and my Eagle rating.  He concluded with these words, “and, moderation in all things isn’t fine.”
True to his word, as always, Daddy took me through all the requirements standing between me and my Eagle ranking.  However, as far as Boy Scouts of American is concerned, I never became an Eagle Scout.  My father, dead now more than forty years, and I, knew better.
During my scouting days, I repeated the Boy Scout Oath more times than I can count, never without noting the words –

“On my honor, I will do my best to do my duty to God and my country and to obey the Scout Law;
To help other people at all times;  To keep myself physically strong, mentally awake and morally straight.”

Now I’m a writer, and I’ve written a Writer’s Oath for myself.
Here’s how it goes –

“On my honor, I will always strive to inspire those who choose to read
my words.  I will never forget the power of words to change the world
nor will I misuse that power.”


I realize that my oath limits my audience.  I suspect the majority of us, when given the choice between being inspired or being entertained will choose entertainment.  And I understand that.   Let’s face it, when one is inspired, effort always follows.  On the other hand, entertainment calls only for a passing glance.
By choice, I won’t be an entertainer.  Also, by choice, I will always write with the objective of leaving my readers in a higher, better place.