A Message From Santa 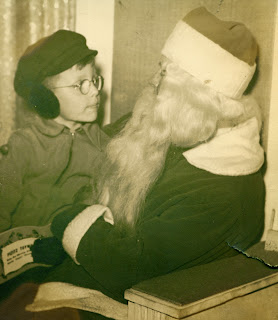 I was five when that picture was snapped.  The guy with me looked like Santa but I wasn't convinced.

Three months earlier, I'd started my school career.  The day I walked into the class room, I was sure about Santa.  Within a week, my confidence in him was almost gone.

Daddy, noticing the change in me, asked, "What's the matter son?"

"The older kids say there is no Santa Claus.  They say parents just made up that story and they put the presents under the tree when the kids go to sleep..."

That’s all I could get out before all the emotion I’d been stuffing erupted and I sobbed.  He wrapped his arms around me and held me close, not speaking until I stopped crying.  Then he squeezed me and said, “Son, just because a lot of people don’t believe in Santa doesn’t mean he isn’t real.  That just means that Santa won’t be stopping at their house.  Those are the houses where parents will have buy presents and put them under the tree while  their children sleep.”

I thought about that, sniffled, and said, “But what if a kid isn’t sure about Santa?  Will Santa  stop at their house?”

Daddy didn’t hesitate, “Well, that won’t be a problem for you Son.  When you go to sleep Christmas Eve, I’ll stay up and ask Santa to come to your room for a minute or two.”

He stopped talking and I wiggled loose from his grasp, moved away from him a bit, looked up and refocused on his eyes.  My Daddy had never told me a single thing that hadn’t proved to be true, but this was the most important thing we’d ever talked about and I wanted to be sure.

He knew what I was doing and met my gaze with his.  He stayed like that for a long time; until I was convinced.  Even then I asked, “Are you sure he’ll come?”

That didn’t stop the talk at school but it stopped my doubt.  I realized none of the older kids who were telling the youngest of us “the truth about Santa,” would ever believe I was going to meet the real Santa, so I didn’t bother to tell them.   No matter what foolishness someone believes, separating them from that belief is about the most difficult task a human can take on.

Finally the day came.  We did all the things my family did on Christmas Eve.  First, dinner with my mother’s parents, her brother and his wife, and then the traditional opening of all the gifts that had been accumulating under the tree for weeks.   I was growing more impatient by the minute.  Daddy, realizing that, gave me more than one furtive gesture, making it clear I should calm down.  Then it was off to my other grandparents’ home for the same ritual, without dinner, but with many more participants.

Then it was done and we were back in the car headed for our house and my rendezvous with Santa Claus.  It must have been near midnight when mother tucked me in.  As she turned to leave my room, I asked, “Would you please tell Daddy I’d like to talk to him.”

A few minutes later Daddy came in my bedroom, put his finger to his lips and whispered, “Don’t worry.  It’s all set.  I've sent a message to the North Pole and I received an answer.  Santa will take a few minutes to talk to you while he drinks the coffee and eats the cake you left out for him.”
I don’t know how long I slept but I do know that I woke instantly when a hand brushed my shoulder.  I sat up, squinted in the faint light, and was immediately crestfallen when saw that it was Daddy.  I thought he was about to tell me some story about how he missed Santa.

Instead he whispered, “He’s here,” and stepped away from the bed.

Immediately Santa was framed in the doorway.  He had a cup of coffee in his hand and grin on his face.  He walked to my bedside, touched my hand, and said, “Always remember this night and I will be with you every Christmas Eve.”

He turned, stepped toward the door, stopped, turned back to me and said, “Tell your friends.  That’s your job because I just don’t have time to talk to each of them.”  He grinned again and then he was gone.

Daddy and I sat in silence, broken a few moments later by the sound of hoofs on the roof and the faint twinkling of bells.