The Messenger - The Message - Naught Else Matters 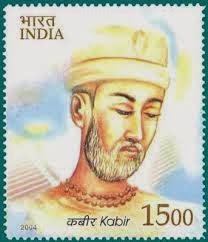 Unlike other ecstatic poets, Kabir was not a monk or an ascetic.  He was married, had children, and made his living weaving cloth.

We don't know if Kabir was Muslim, Hindu, or Sufi.  We do know he was, to quote Robert Bly, one of his translators, a powerful spiritual man and poet.

As such, he seems to have a direct connection with the One, as reflected in his work which comes to us over more than 500 years of time; though no one knows for sure when he was born or when he died, all agree his work is timeless.

Kabir, like the man whose birth we've celebrated this day, did not pull punches.  His message is clear, timeless, and inspirational to those who believe there is more to be had from life and are committed to finding it.  On that note, I share his poem with you.

The Time Before Death - Kabir (version by Robert Bly)

If you don't break your ropes while you're alive,
do you think
ghosts will do it after?

The idea that the soul will rejoin with the ecstatic
just because the body is rotten—
that is all fantasy.
What is found now is found then.
If you find nothing now,
you will simply end up with an apartment in the City of Death.

If you make love with the divine now, in the next life
you will have the face of satisfied desire.

So plunge into the truth, find out who the Teacher is,
Believe in the Great Sound!

Kabir says this:  When the Guest is being searched for;
it is the intensity of the longing for the Guest that does all the work.

Look at me, and you will see a slave of that intensity.

Merry Christmas - May your face reflect the satisfied desire of your soul as you walk in joy with the Great Sound.