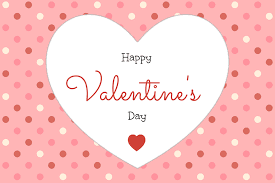 "How do you know what's inside?" He asked.

He'd spoken so softly I wasn't sure he was talking to me.

I turned toward him.  Probably late thirties or early forties I thought.  He was peeking cautiously out from under a battered blue baseball cap. Hiding, I thought.  He'd probably rather be caught in a saloon or even a church rather than the local Hallmark shop.

He stuck a Valentine toward me and asked again, "How do you know what's inside?"

I took the card and thought I detected a tremble in his hand, but I wasn't sure.  The card was hermetically sealed in cellophane, to protect it from damage.  Over zealous shoppers can be a problem in a card shop.

I flipped it over and took a half-step left until our shoulders touched and pointed to the paragraph on the back that began, "The message inside is..."

He snatched the card back, before I could read the next words.  He held the card close to his face stared at the now revealed message, shook his head, and in an even softer voice, almost a whisper, he said, "We've only been dating for two months.  I don't want her to get the wrong message."

He dropped his eyes, and I slipped the card out of his hand and read the message.  I looked at him and he raised his eyes to mine, "You're right, you don't want to give her this one," I said.

For a moment, I thought he was going to cry but he didn't.

"What should I do?" He asked after a couple of seconds of staring at the card?

I looked to the right and spotted a card, also hermetically sealed, that I had just put back on the shelf. The front depicted a stylized eyelid, closed in a wink.  I flipped it over and said, "This message is pretty noncommittal."  His eyes glazed for an instant, and I clarified my statement, "She won't get the wrong idea from it.  It just says, 'You make me want to wink.'"

His eyes went blank and he handed the card back saying, "It's a girl's eye."

Actually, I had thought of it but didn't think it would matter.  Silly me.

Before I could suggest another, he moved away, and with the secret information I'd given him began searching on his on.  I don't blame him, I thought.  Obviously a grizzled old guy like me could get him in serious trouble.

Later, we checked out at the same time.  He'd found a Valentine that met his conditions, but he didn't bother to let me read the message inside.

However, he did ask about the Olivina lotion and soap I was buy, and before I could mislead him on that, Therese, the shop owner said, "Mr. Carson's wife loves Olivina product, so he buys a lot of them."

Hearing it from Therese made Olivina a safe choice.  I paid for my Valentine's, lotion, and soap and moved away from the counter to spend some quality time with Spook, the Hallmark cat.

A few minutes later, the shy cap guy left with his card and lotion but no soap. Probably didn't want to appear overly committed I thought and then I thought, It's a damn good thing I didn't tell him about the vase of long stem red roses I'd purchased Friday.

I'd almost forgotten the incident until this morning when I read Caleb Pirtle's Valentine blog, Why Love Hangs Around So Long.  Then the Valentine conversation slammed back to my mind and I laughed.  The guy at the Hallmark Shop was playing volleyball and had already lost the game.

Thanks for the blog Caleb.  And thanks to my lovely wife, Christina, who plays one-sided tug of war and with me and who gave me two Valentine Cards, the messages on each went way beyond a wink.