On Death - The Philosophy of Travis McGee # 8

In case you are following the Travis McGee Series of blogs and you're wondering what happened to #7, it is here.   Three years ago I was running a Wordpress powered blog and for some reason, I can no longer remember, I added another one.  Before I started using the new one, I realized that Blogger (a blogging platform created and maintained by Google) is free and so much simpler to use.  In addition, at that time, but no longer, I could pay a small amount and buy my own domain name, in this case bert-blogging.com - so I did, and I've been using blogger exclusively until now.

One day last week, I received an email notice that my domain name, Kindle-Scribe.com was expiring.  No one wants to expire or have anything of value that belongs to them expire.  So I renewed the name, checked the site, which is hosted by Bluehost.com, and found it was working fine in spite of being way out of date.  Then I wondered if I could still operate a Wordpress site.  I thought, What the heck.  It's like an IQ test.  Give it a shot.  And I did.

Twenty-four hours later, hostgator.com  advised me that my domain, bertcarson-author.com was going to expire in a few days.  I opened the long unused site and got caught in a blog I had posted three years ago called What Are You Reading, and I thought, Well, I've got one Wordpress site running, it can't hurt to have two... or maybe it was the old picture of me writing, in my hotel room in Hawaii, while a white pigeon, perched on the balcony railing looks on, that is on the home page of the site, which convinced me to renew and re-activate the old site.

Anyway, that's why I'm now operating one blog site and two web sites.  Feel free to sign up for the email versions of my blogs posts on each site, then it won't matter where I post a blog, you'll get it in your email in-basket minutes after I post it.

And now, death, which is the business of the day, or at least this Travis McGee blog post.  I've been thinking about writing a blog about death for a while.  Before you jump to a conclusion, I'm fine, still doing everything I ever did, just a bit slower than when I was at sixteen, thirty-six, fifty-six, or sixty-six, but I've discovered, as I slow down, that slow isn't always a bad thing.  Still, every sunset I celebrate brings me one sunset nearer the last one I'll celebrate, so I think it's natural that I should be paying more attention to the topic.

Years ago, when I first began seriously considering my death, I noticed I had no fear around the topic, just some ideas about how it should happen, or maybe I should say, how it shouldn't happen.  A lingering, pain-filled, fortune-draining, process isn't in my future.  I'm just not into long good byes, pain, or throwing away money for no reason other than the perpetuation of grossly inflated medical industry and its practitioners.

As I considered the subject further, I began collecting quotes and making random notes on my thoughts about death.  Things like my buddy and fellow Vietnam Vet, Dan Beck, said commenting some twenty years ago on the body cast I'd acquired as the result of rolling my Jeep to avoid hitting a dog, "Hell, that's no big deal Carson.  We've been on borrowed time since we pulled out of Vietnam."

And then there's the George Gurdijieff quote on death that I've loved since the first time I read it:  "Every one of those unfortunates during the process of existence should constantly sense and be cognizant of the inevitability of his own death as well as of the death of everyone upon whom his eyes or attention rests. Only such a sensation and such a cognizance can now destroy the egoism completely crystallized in them that has swallowed up the whole of their Essence, and also that tendency to hate others which flows from it."

However, as is often the case, it took Travis McGee to knock me on my butt and get me writing about death and what I thought of it.  Here's the quote that did it. 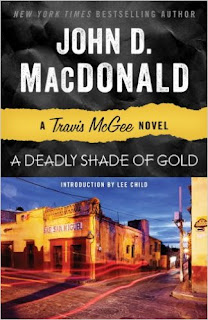 I sat on the tin stool, arms propped on my knees, and debated telling her. It is so damn strange about the dead. Life is like a big ship, all lights and action and turmoil, chugging across a dark sea. You have to drop the dead ones over the side. An insignificant little splash, and the ship goes on. For them the ship stops at that instant. For me Sam was back there somewhere, further behind the ship every day. I could look back and think of all the others I knew, dropped all the way back to the horizon and beyond, and so much had changed since they were gone they wouldn’t know the people aboard, know the new rules of the deck games. The voyage saddens as you lose them. You wish they could see how things are. You know that inevitably they’ll drop you over the side, you and everyone you have loved and known, little consecutive splashes in the silent sea, while the ship maintains its unknown course. Dropping Sam over had been just a little more memorable for Nora than for me. It would stay with her a little longer, perhaps."

That's from A Deadly Shade Of Gold, the 5th in the 21 book Travis McGee series written by John D. MacDonald, originally published in 1965, five years after I graduated from Palatka Senior High School.  Now that I've seen that photo again, the fifty-five plus year old memories are flooding into my mind and with three hungry blog sites to keep fed I'll be sharing them with you.  Who knows what I'll be telling you about Inez, and Jackie, and all the others who are still eighteen as far as I'm concerned - you see, I've not been to a class reunion, so I don't know for sure they've aged.  That photo has probably been photo-shopped a little bit.