Haunting Poems - The Ones That Cross Time And Wake You... 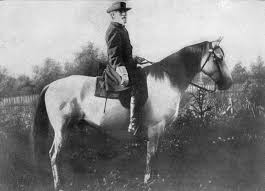 I dreamt last night that there was wind and rain.
I got up and looked out, but all was strange;
A muddy track across a wooded plain;
A distant tumult; angry cries, exchange of fire.
And then, out of that dreadful night,
Appeared a scarecrow army, staggering,
Defiant, famished.
In the quenched starlight
They marched on to their bitter reckoning.


Their sleepless, bloodshot eyes were turned to me.
Their flags hung black against the pelting sky.
Their jests and curses echoed whisperingly,
As though from long-lost years of sorrow—
Why,
You’re weeping! What, then?
What more did you see?
A gray man on a gray horse rode by.

That is a haunting poem.  One that reaches a hand through time, shakes me awake and drags me to the bookcase, where I search for an obscure book that I'm sure holds the haunting poem.

Ozymandias was my first haunting poem.


I met a traveller from an antique land,
Who said - "Two vast and trunkless legs of stone
Stand in the desert... Near them, on the sand,
Half sunk a shattered visage lies, whose frown,
And wrinkled lip, and sneer of cold command,
Tell that its sculptor well those passions read
Which yet survive, stamped on these lifeless things,
The hand that mocked them, and the heart that fed;
And on the pedestal, these words appear:
My name is Ozymandias, King of Kings;
Look on my Works, ye Mighty, and despair!
Nothing beside remains.  Round the decay
Of that colossal Wreck, boundless and bare
The lone and level sands stretch far away.

Since I met the King of Kings, there have been other haunting poems for me.  Bold time travelers all. And, they have another commonalty.  They don't hide their true nature. For example, recall for a moment, your first reading of "She walks in beauty like the night..."  I'll bet you didn't think you'd just stumbled on to nursery rhyme when you read that, and I'll bet you didn't stop reading there.

You don't have to be asleep to be visited by a haunting poem.  You can be idly reading the blog post of friend, like David Atkinson, and happen on "There was a man who dwelt alone beneath the moon in shadow..." which is a line of a poem written by JRR Tolkien.  A poem long forgotten, now rescued, and dragged into the twenty-first century, where it just might trigger the appearance of another of my haunting poems, like the one at the beginning of this post.

That poem, was written by Richard Adams, the author of Watership Down, and is from the first page of my favorite Adams book, Traveller.  The gray man of the poem is Robert E. Lee.  The gray horse, Traveller.  Two  historic figures, who, when portrayed in poem became one of my haunting poems and as such, not unwelcome midnight visitors.

Just in case the woman who walks in beauty like the night haunts you, I'll leave you with her, thereby possibly saving you from a midnight fall as you search your bookcase for her...