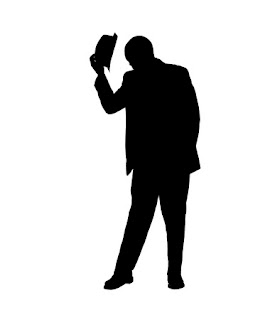 This morning, more asleep than awake, I checked my email and found this message:

We are publishing your blog about West with the Night today on Venture Galleries.
Here is the link for your social media: https://venturegalleries.com/80509-2/
Bert, I have read and posted a lot of blogs during the past five years.
This one is the best I've read. Pure inspiration and pure genius.
Caleb

Without thinking, I replied, "Much obliged..."

Before I hit send, I plugged in five words before the "Much obliged.."  What I added was, "as daddy used to say," because "much obliged" isn't something that I say.

A few minutes later, gazing out the window as Baker Street (as in Sherlock Holmes), the name I've given to the group of blue jays that wake me every morning with a reminder to scatter a handful of raw peanuts on the ground for them, I thought once again of the words, much obliged.

I fired up my laptop, something Daddy, gone for almost fifty years, never dreamed of, and Googled the phrase.  I found a number of definitions.  This one, from Collins English Dictionary, pretty much echoed all of them:

Much obliged - An expression used when one wants to indicate that one is very grateful for something.

That wasn't anything new to me, and I was about to leave the page when I noticed something that was new.  Just below the definition was a chart that showed the usage of the phrase over a selected number of years. I plugged in 100 years and this is what came up:

Daddy lived in the peak usage years for the phrase, "much obliged."  After his death, in 1968, it was pretty much a forgotten term.  Understand, I don't think my daddy's passing spelled the end of the use of those two words.

However, as Baker Street scooped up the last of the peanuts and flew away, without so much as a simple "thank you," much less a heartfelt "much obliged," I wondered, is this more than the demise of an old phrase.  I glanced at the charted trend again and got it, maybe we just aren't as grateful as we used to be.  Maybe we don't believe we have time to be very grateful, in our mad rush though time and space.

Maybe we are only "much obliged" when we are half-asleep and do not pause to recall who we believe we are and how little time we think have....

Well, be that as it may or may not, I'm much obliged that you spent some of your time with me and Caleb and Baker Street.  You're always welcome here....