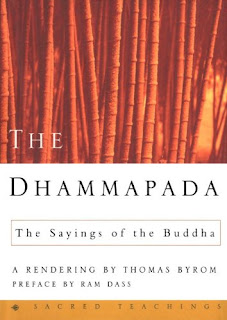 It is recorded that The Buddha taught for more than forty-five years.  It's evident that many of his teachings were recorded and have passed down to us.  The Dhammapada, is probably the best known of his teachings.  Translated nearly as often as the Bible, there is a version for every taste.

My favorite is Thomas Byrom's translation.  I have worn out few of the pocket sized volumes so I always have a spare or two nearby.

Of late I've spent about as much time with the Audible version of the work.  It is narrated by Jacob Needleman and there's a bonus included with that version - at the end of the book, Needleman reads his essay on Buddhism, which is far more than a definition of the religion.

There are two ways you can hear/read the essay.  Buy the Audible book, which you can do by clicking on cover and following the purchase directions or you can continue reading:


Buddhism was born in India. In its beginnings it conceived of itself not as a new religion but as a reconstitution of what is essential in the vastness of the Hindu tradition. Taken as a whole, the Hindu religion can be likened to an Olympian armed campaign with great generals dispersed abroad, their huge armies and infinitely variegated weaponry converging upon the enemy, the ego, under some divinely conceived master strategy. Compared to this, Buddhism appears upon the Indian scene as a direct hand-to-hand attack with no holds barred, striking instantly and mercilessly at the enemy’s weakest point. By and large, Buddhism has retained this quality of one-pointed practicality even amid the later flowering of a metaphysics and mythology which, in all of its aspects, rivals the entirety of Hinduism.

Put succinctly, the Buddha, who is understood to have lived and taught in the sixth century BC, taught that the principal cause of all human suffering and desolation is the deeply ingrained belief that there is such a thing as a self, or ego, that persists through time and change. Everything else in Buddhism, its art, philosophy, rituals, and techniques, originated as tools for the destruction of man’s illusion that he is a self. This doctrine of no-self or non-Atman is, as it is said, the diamond which cuts through all errors and confusions of humanity.

According to this teaching, everything in human nature is in flux, and a man is nothing but a serial bundle of sensations, thoughts, and feelings, one proceeding from another, with nothing to hold them together either in life or death. And not only man, but all things in the universe are without self, without a fixed nature that abides from moment to moment. In the endless and rigorously determined chain of cause and effect that constitutes the universe, we human beings fail by fixing our interest or desire upon one or another phenomenal aggregate, either within our self or external to our self. Therein is the root of all our sorrow. What can liberate us is the deep and thorough understanding of all things, including the personality, as causally determined processes of becoming.

Consciousness – meaning the totality of thought, feeling, perception, sensation, pleasure, and pain – is not a being but a passion, not an activity but only a sequence of reactions in which we, who have no power to be either as or when we will, are fatally involved. Individuality is motivated by and perpetuated by wanting; and the cause of all wanting is ignorance – for we ignore that the objects of our desire can never be possessed in any real sense of the word, ignore that even when we have got what we want, we still want to keep it and are still in the state of desire. The ignorance meant is of things as they really are, and the consequent attribution of substantiality to what is merely phenomenal; the seeing of self in what is not-self.

At first glance, this doctrine of no-self seems in direct opposition to the Hindu view. But if there is any general view with which the Buddhist doctrine conflicts, it is surely our own Western worldview as embodied not only in the popular understanding of Judeo-Christian doctrine but in the goals our whole civilization has set for itself.

The religions of the West have imbued us with the idea of an individual, eternal soul created by God – also, in his way, an individual – infinitely precious and irreducibly real. As our modern society drew away from religious doctrine, it substituted for the soul the idea of individual personality, not immortal perhaps, but for that very reason all the more our own and precious. The establishment of our identity, our role, has been the banner cry not only of scientific psychology but of all the major intellectual movements of modern times, including existentialism and humanism. We measure a person’s strength by what we take to be the distinctness and vividness of his individuality, and we all seek to make our mark, either as artists, scientists, or business people. To the Buddhist, all this striving is the pursuit of a phantom. The identity we seek to establish is nothing more than a thought, a picture in the mind of what we are or can be; it is in nowise based on fact. Our sense of persistence and sameness through change is a trick played upon us by the automatic functions of memory and buttressed by the fact that we are given a name and treated by others as though we were a self. Indeed, our whole society is but a vast collection of sleepwalkers each addressing the other and conceiving of himself within his own dream of selfhood. All our ideas of morality and obligation, blame and praise are based on this dream and serve only to strengthen the illusion of its reality.

Putting the Buddhist doctrine of no-self in the above way, its congruence with Hindu thought becomes clearer. We might say that for the Hindu or Brahmanic religion, human ignorance is the ignorance of who we are, of our ultimate divinity, where for Buddhism it is ignorance of what we are not. We are not this ego. It is in fact a cardinal trait of Buddhism that its teachings are in negative terms. Break down the illusion, the error, and the truth will appear by itself, for it is always there. It is only obscured and hidden by our ignorant beliefs about ourselves and the desires attached thereto.

Of all the great religious teachers of the world, none has incarnated and lived the idea that ultimate reality is beyond the grasp of the ordinary mind with more purity and concentration than the Buddha. This in part explains why the Buddha’s discourses say nothing about the existence of a Supreme Being, for example, or about immortality. Such questions “tend not to edification” since they are put by the deluded mind which is quite content to speculate endlessly about these matters while clinging to the very beliefs which perpetuate its suffering.

Its strategy of negation has misled many Westerners into thinking Buddhism is pessimistic and antilife. Some have even thought of nirvana, the ultimate goal of Buddhist discipline, as a sort of spiritual suicide. Nothing could be further from the truth, and in fact there is no religion which has a higher estimation of human possibility. It is only that it is not spoken of directly and positively. The exalted level of nirvana can be seen indirectly by attending to everything which the Buddhists say it is not. It is not love, consciousness, peace, freedom, happiness, or immortality in any sense that we understand. We are given no words for it because we have no experience of it; and in the absence of a corresponding experience, names merely purchase further illusions. The Gospels, we may recall, also speak of the “peace that passeth understanding.”

We come to the conclusion that just as the great mystics and saints of our own traditions could describe the Supreme Reality only by negation and analogy, so the Buddhist tells us of nirvana. Since, however, nirvana also designates the whole of reality, then we see why Buddhism also refuses to admit that our ordinary thinking and language can accurately be applied to anything that is real. Thus, reality is also named the void or emptiness.

A final note – especially important when we come to inquire if a genuine Buddhist way can take root on our own soil. Buddhist moral rules are never ends in themselves. It is essential to realize that ethical commandments in the Dhammapada are understood as necessary preliminaries to any greater spiritual development.

What is especially valuable about the Dhammapada is that it shows us there is no real separation between true human morality and the process of inner development. The admonitions and insights in this great text resonate on all levels of our search for our authentic humanity. At one stroke they bring inspiration to our halting everyday efforts to care for our neighbor and guidance in our efforts to look into ourselves for the radiant energy that is traditionally termed the Buddha nature.

The Dhammapada presents itself as the actual sayings of Gautama Buddha and was originally compiled for the growing community of Buddhist monks. It was apparently in existence by the time of the emperor Ashoka in 250 BC, and quickly became popular with all schools of Buddhist thought and practice. It is now no doubt time for it to speak more universally to the whole of our morally and spiritually hungry modern world.