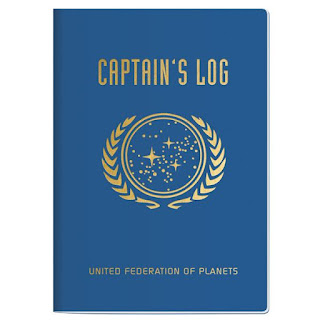 Every day, or night, depending on my energy level, status of my to-do list or the relative impact of the events I participated in during my day's travel through the universe, I make an entry in my Captain's Log (which isn't quite as elegant as the one pictured - but you get the idea).

Here's an excerpt from The Captain's Log entry for Earthdate 18 February 2018 (last night), the one that began my thought train moving on this track:

I don't remember which came first, thinking about Stephen Woodfin or thinking about John D. MacDonald.  Anyway, it doesn't matter which was first, they quickly got all mixed up and with no recollection of how I got there, or even where I was, I found myself reading a blog post written by Steven Woodfin, almost three years ago.  The post, The Best Book I've Ever Read, got my attention because it was illustrated with a photo of the cover of John D's book, The End of the Night.

Since I'm saving the last two Travis McGee novels like a drunk sipping his last beer, an hour after closing time, I thought, this is perfect, I can have a John D. read and save Travis, all at the same time.  So I walked up to the digital bookstore/bar that lives inside my computer, where it never sleeps, and called out to Jeff Bezos, the amiable barkeep, "Jeff, I'll have one End of the Night, in Kindle format please."

I added the delivery particulars and glanced up at Jeff, who, as usual, didn't speak.  He smiled that shy grin of his, the one he flashes every time he sells me something, which is often, formed his thumb and forefinger into a Robert B. Parker/Spenser virtual pistol, and pretended to shoot me.

A moment later I received digital notification that his aim was sure and the book had indeed downloaded to my Kindle.  I closed the web page, opened my Kindle and there it was.  As I clicked on the digital masterpiece, I silently and unconsciously repeated my usual John D. MacDonald mantra, "don't open that now...  you... know... what... will... happen."

Sometime later, as I reviewed the notes I'd made on the first chapter, most of which you'll read here later this week, in the Parkland Post, turned out the light, and just as I was falling asleep I saw Stephen Woodfin, grinning, as he aimed his Spenser "pistol" at my head..."  from my Captain's Log Sunday 2/18/18

The eye sees
what the mind believes.
And all that I know of war,
all that I have heard of peace,
has me looking over my shoulder
for that one bullet
which still has my name on it -
circling
round and round the globe
waiting and circling
circling and waiting
until I break from cover
and takes its best last shot.

That's the way words work too, just like bullets.  Once read, once burned into your brain, they watch and wait for the moment they can spring from the darkness of your almost forgotten, ghost-shadow memories, and when you least expect it, they body slam you to the ground, reminding you of who you really are:

Thanks Stephen, John, Steve, and all of the rest of you who are out there, slowly circling in my mind.

PS: While you are following links and drifting with your word bullets, if you realize you're running low on ammo, check this out Caleb and Linda Pirtle - Here Comes A Mystery