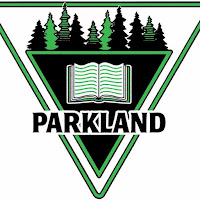 Parkland is a word.  Parkland isn't a depraved, unspeakably violent act.  It is a word.  A word we've used to name towns, golf courses, Baptist Churches, shopping centers, and the hospital where John Kennedy, the 35th President of the United States, was declared dead.

For a moment, in our current grief and dismay, we've forgotten that there is nothing bad or good about the word Parkland.  We create names, and we supply the meaning to go with them.

For example, Parkland is also the name of an elementary school in Coquitlam, British Columbia, Canada.  I used the school's logo to illustrate this post because, it depicts life and knowledge, two resources we must use if we are to move beyond the Parkland of Feb 14th.

Gun control isn't the solution because guns aren't the problem.  Singling out an agency, in this case, the FBI, to shoulder the blame for a senseless shooting is as senseless as the crime itself.  Blaming Donald Trump because of his mindless tweets and remarks makes no more sense than tearing down the school, which has been suggested by more than one person.

The issue is much more complex than an individual's "mental condition," or the failure of a law enforcement agency to handle reports of suspicious behavior, or the lack of security at a school, or even the instigators unwillingness to ask for help.

We have not identified the core problem and until we do, we're wasting time and energy proposing solutions that are as senseless as the act they are addressing.  To find the real issue, let's step further away from the horror of the manifestation, take a deep breath and think about things for a moment.  It's amazing what a breath of cool clean air wafting around the brain can do.

The second paragraph of The Declaration of Independence begins, "We hold these these truths to be self-evident..."  And therein lies the issue.  A large portion of us no longer understand the truths the document describes.  If we don't understand them, how can we uphold and defend them?  We can't.  Taking away assault weapons won't make the truths of the Declaration of Independence any more self-evident than firing a law enforcement officer who made a mistake.

If you've ever read the work of the novelist John D. MacDonald, you know that he was a sage, a man whose wisdom is more applicable today than ever.  In his book, The End of the Night, he tells the story of four young people who go on a mindless killing rampage.  Early in the book, the lawyer for the defendants writes, in a memorandum, his thoughts following his initial interview with the parents of one of the defendants:

"I have experienced a partial failure of communication with Kirby's parents.  I understand why this must be, as I have seen it before.  Everyone who works with criminals in any capacity is familiar with this phenomenon.  It is, I suspect a classification error.  All their lives, they have been conscious of a great gulf between the mass of decent folk and  the sick, savage, dangerous minority  known as criminals.  Thus they cannot comprehend that their son, their decent young heir, has leaped the unbridgeable gulf.  They believe such a feat impossible, and thus the accusation of society must be an error.  A boyish prank has been misunderstood.  People have lied about him.  Or he has fallen under the temporary influence of evil companions.

Their error lies in their inability to see how easy it is to step across the gulf.  Perhaps, in maturity, when ethical patterns are firmly established, one cannot cross that gulf.  But in youth, in the traditional years of rebellion, it is not a gulf.  It is an almost imperceptible scratch in the dust.  To the youth it is arbitrary and meaningless.  To society it is a life and death division."

My less than eloquent take on John D.'s statement is, when truth is no longer self-evident, it is our task to insure that it is once again self-evident.  To do that, we might have to go further back and redefine those truths: life, liberty and the pursuit of happiness.  Sobeit.  The task is before us.  Let's get on with it.