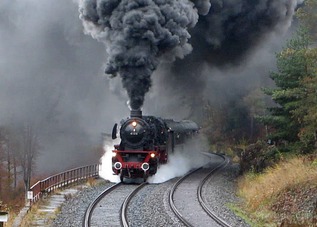 Some call it "stream of consciousness," others refer to it as a "line of thought." I suspect most don't have a name for the phenomenon that we all experience every day twenty-four seven.

Here's how it goes:

"The Trivandrum Mail was on time.  It came out of the jungle and pounded into Villupuram Junction at 3:18 on a sweltry afternoon in south India.  When the whistle first sounded far and deep in the countryside, people began pressing toward the edge of the station platform..."

This morning the whistle of the "Trivandrum Mail" woke me at least an hour before I had to get up.  Before I actually heard the train, its whistle sounded again, followed closely by a third blast.  Listening close, I heard the first pounding of the train, followed by the screams of Baker Street (a flock of blue jays whose addiction to raw peanuts I enable once and sometimes twice a day).

I tried to close my eyes and pretend Baker wasn't outside the window hanging onto a rain drenched branch, doing his best to get me out of the warm bed.  I even had the crazy thought that if I clenched my eyes closed tight enough, I could banish both Baker and the train.

The whistle sounded again, much louder than before, and Baker faded from my consciousness, replaced by a question, "I wonder what James Waller is doing these days."

That was quickly followed by a thought of James Patterson, the current best selling writer of fiction in the world - specifically I thought about the MasterClass lectures I'm loving.  I thought specifically about the lecture on openings and wondered if I would ever learn to write a pounding line like Waller's.

The whistle blew louder sweeping James Patterson out of my mind, leaving in his place John Davidson driving down a stretch of western interstate, in his old tractor/trailer, saying to himself, "I spent my 62nd birthday the same way I spent the 38 before it, moving freight from one side of the country to another... no cake... no party... no celebration at all, unless you count my birthday surprise from Harry..."

Before I could go any further with John, the protagonist from my unpublished book, The High Road, which is undergoing a major rewrite, the whistle sounded again, and I remembered that I'd told myself last night about writing a blog today.  I immediately recalled my response to that thought, "but I don't have a single idea to write about."

Then, in the rush that always startles me, the train rounded the last bend, charging out of the jungle in a slow arc, growing bigger and even bigger, until it filled my entire thought frame.  That's when I knew the commercial was over and the message was at hand.

I waited, feeling the pounding of the monstrously huge steam engine and the heat of its presence, and marveled as I was encompassed by the glow of my own anticipation - then came the message, Write About Thought Trains.