by Bert Carson
We are thirteen days and twelve games into the new baseball season, and I haven't written a single baseball blog - until now.

Since I can not think of a more fitting way to lead into my idea about the creation of  storybook endings than to share a couple of them, let's go to the ball park.

Frank Wren, the Atlanta Braves' General Manager, is the wheeler dealer behind player acquisition, and he made some key ones in the off season that have played out like a storybook.

One that has caught the attention of baseball fans everywhere is the Brave's acquisition of two brothers, Justin and B.J. Upton.  Justin, formerly with the Arizona Diamond Backs, and B.J., formerly with the Tampa Bay Rays, haven't played on the same team since high school.

Playing together in the pros is a storybook for the Uptons and for Brave's fans. One of the first chapters of their storybook was written last Friday.  Five games into the season, the Braves trailed the Cubs by one run in the bottom of the 9th inning.  B.J. came to bat and hit his first home run as a Brave tying the game.  Minutes later, Justin came to bat, and, you guessed it; he hit the game winning home run.  If you think that was storybook, add two more parts - their parents were in the stands watching - and they became the first brothers to win a game with solo homers in the same inning in two hundred years of professional baseball.

And then there's Evan Gattis, a 26 year old rookie who gave up baseball for four years.  During that time he was a cart boy at a golf course, a ski lift operator, and a janitor - today he uses his janitor badge as his twitter ID.

Three years ago, satisfied that he had found the answers to the questions that sent him wandering, he decided to give baseball another shot.  The Braves, in an amazing moment of spiritual insight, signed him in the 23rd round of the draft for bargain basement price of $1,000.00.

Today he's the number one Braves catcher, at least until Brian McCann returns to the line up from the disabled list.  In his first game, he hit his first major league home run while his father was being interviewed in the stands.  Twelve games into the season, Evan is batting 333 and has hit 3 home runs and knocked in six runs.  Oh yes, he played first base Friday night in Atlanta's win over the Washington Nationals.

I shared those stories about three young men who play baseball to make a point about story book endings.   From my experience, I've discovered there is only one way to write a storybook ending.  That is to do what Frank Wren has done - create powerful characters, characters with heart and desire, then put then in situation where they can do what you know they are capable of doing, then let them do it.  That's the secret:  authors don't create storybook endings, characters do. 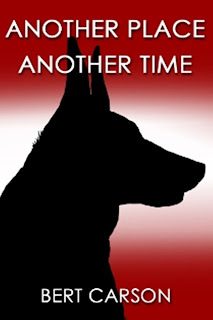 When I wrote Another Place Another Time, I created two characters, Leonard Jacobson, a very intelligent loner, who was dismissed from his high school three months before graduation because the principle said he was a disturbing influence, though he never created a disturbance and his grades were perfect.  With his diploma in hand, Leonard, a much-loved only child, went home and worked in the family grocery story until he was drafted.

After three full cycles of the Army's eight week basic training, his First Sergeant told him he was a disturbing influence and he was sent directly to Advanced Infantry Training without graduating from Basic Training.

Two hours after arriving at AIT, Leonard met his new Company Commander, Captain Kennedy, a recent returnee from Vietnam.  Kennedy recognized Leonard's potential and introduced him to the possibility of becoming a Scout Dog Handler.  Leonard decided that was what he wanted to do.  Months later, after meeting all of Scout Dog Handler training requirements, Leonard was accepted into the program.  He arrived at the training center before any of his classmates.  That's when he met K9 #68-77, a black German shepherd who had arrived at the training center just moments ahead of Leonard.

Here is that scene, told by Leonard Jacobson.

Two minutes later, I was at the kennel.  I saw Captain Cox peering into one of the runs.  “Where is he, Captain?”
As soon as I spoke, a shadow detached itself from the back of the run and moved rapidly toward the fence.  Henry pointed and said, “There he is, all eighty-five pounds of him.  Watch out.”
Just before reaching the fence, the shadow reared on his hind legs and stopped with his paws pressed lightly on the wire mesh at my shoulder level.  It was the black German Shepherd that I had been waiting for.  He looked right into my eyes.  I could hear the sound of his breathing, which was easy despite his all-out dash to the fence.  After a moment of intense staring, he wagged his tail.  Then I noticed that he hadn’t made a sound; no barking or whining, the normal sounds you hear from new dogs.
I turned to Captain Cox.  "What's the matter with him, Sir?"
"He's too young, Leonard.  Look closely and you'll see what I mean.  You know that a dog has to be two years old to go through the training unless there is a special exception, and there has never been one for a dog this young.  Leonard, he is only thirteen months old.  I just called the Vet who sent him.  He confirmed the dog's age and admitted that he lied on the paperwork he originally sent.  I asked him why he had lied and said there were two reasons.  He told me the first reason was this dog is the smartest dog he has ever seen."
Captain Cox hesitated.
“And the second reason, Captain?”
“He said that if we didn’t take him, there was no other place for him.  He’d have to put him down.  He told me the dog had belonged to an old rancher who lived just outside Missoula.  One day the old man came up missing, and his neighbors began searching for him.  The next day they found him dead, thrown by his horse.  Your dog was guarding him, and he wouldn’t let anyone near him.  They had to call the animal control unit to get him away from the body.  All the ranchers around Missoula have heard the story and they are all afraid of him, so no one is willing to take him.  The Vet said that if we didn’t take him, then he would have to put him down.”
I looked at the big dog still standing on hind legs and still silent.  “Sir, maybe he can do it.”
Captain Cox turned toward me.  Looking straight in my eyes he asked, “Leonard, do you know what will happen to you if he doesn’t make it.”
“Yes, Sir, I know.  I wash out of the training.”
“Do you know what will happen to you if you wash out of this training?”
“Yes, Sir…I’ll go to Vietnam… without a dog.  I’ll be assigned to a Ranger unit.”
“Do you want to risk that, Leonard?”
“If I say I don’t want to risk it, what happens to him, Sir?”
Captain Cox didn’t hesitate.  “I don’t like this, Leonard, but we’ll put him down tonight and start trying to find another dog for you.  If we do that you won’t lose your training slot.  You’ll wait here at the school until we can find another dog for you.”
I turned to the dog, touched his nose through the chain-link fence and whispered, “Can you do it, Boy?”
He wagged his tail and, suddenly I knew he could do it.  Understand what I’m saying here.  I asked him a question, and in a couple of seconds, I knew the answer.  I wasn’t making something up or playing mind games with myself.  The dog had actually communicated with me.
I turned back to Captain Cox and said, “He says he can do it, Sir, and I believe him.  If you’ll issue the exception, we’ll go through the training together, Sir.”
Captain Cox looked at the dog, then back at me.  “Leonard, if you’re sure that’s what you want, I’ll do it.”
“I’m sure, Sir.”
Only then did the dog make his first sound, a soft bark.
Captain Cox laughed and said, “Good luck to you…to both of you.”
*********


Late that night, I asked K-9 #68-77, my dog’s official Army name, if he liked the name, Whispers.  I’d picked that name because he seldom barked or whined.  He wagged his tail, and in that moment he became Whispers.
I knelt beside him, put my arms around his neck and, since no one was around, I cried a little bit.  I knew that everything that I’d done to get to that moment had been worth it.
________________

From that point forward, Bert Carson was just along to record Leonard and Whisper's story.

That's how I write storybooks.