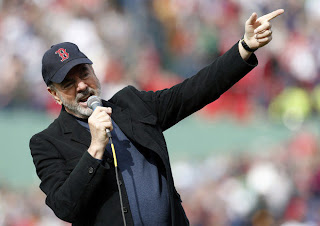 After canceling yesterday's ball game, the Red Sox played today to a sell out crowd.  The pregame ceremonies included a number of tributes to both survivors and victims of Monday's bombings near the finish line of the Boston Marathon.

One tribute the ball club had not counted on turned out to be one of the most memorable.  Neil Diamond, on his own volition, flew from his home in Los Angles, called team officials as soon as he arrived in Boston, and asked if he could sing Sweet Caroline, which is always played mid-eighth inning.  Of course, they agreed.

I won't try to describe what happened, but I will share one of the many videos uploaded by fans afterwards:


If there is any comfort in tragedy it is that we love and support each other.
We love you Boston!