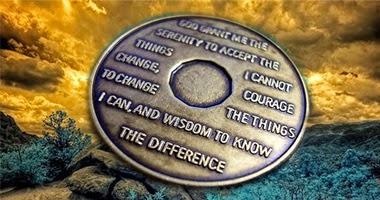 If this were an AA meeting and I was addressing the group, that's the first thing I would say.

This isn't an AA meeting, or any other conventional twelve-step meeting, but the introduction still applies because this is me talking to you about my addiction.  I'm doing that because I'm an addict, and I suspect you're reading this because you want to know what I have to say about it.

The first thing you should know is, I'm not addicted to alcohol.  I don't like the taste of alcohol in any form, so I'm a teetotaler.  I'm not addicted to drugs or any other controlled substance for the same reason I'm not an alcoholic.  After a couple of days on morphine, following a serious auto accident, I determined pain was better than loss of mental focus.

However, my addiction is just as self-destructive.  I'm addicted to rage and have been for going on fifty years.  I've attended many open 12 step meetings, and I've heard the horror stories that go with substance abuse. I can tell equally horrific stories of my addiction.

Many years ago, I had the good fortune to attend a number of open AA meetings sponsored and conducted by Vietnam Veterans.  As I listened to the stories and met the men and women who were regulars at the meetings, I realized that the 12 Steps might help me with my addiction.  So I began working them.  And they did help.  (If you aren't familiar with the 12 Steps - here's a link to them).

In spite of my work with the 12 steps, there have been numerous times when I've fallen off the wagon.  When that happens, I'm as out of control as any drunk, or drug addict, you've ever seen or heard of.

To be more specific, I've never directed my rage at a loved one and the episodes are fairly short-lived.  The reason they are short lived is because I've always, and I mean ALWAYS, so intimidated the person, or persons that the rage was directed toward that they immediately fled the scene.

That was the case until last Saturday night.  That's when I met an angel who shared the 13th Step with me.  Check your calendar and you'll remember that last Saturday was July 5th, the day after a major holiday and the middle day of a long weekend.  The clubs in downtown Huntsville were packed and noisy.  Traffic was thick as people were drawn to the area like moths to candles.  And there I was, a rage addict, running through the middle of the raucous celebration.

Someone behind me blew their horn, and I fell off the rage wagon, just like an alcoholic, only quicker.  Before the sound faded a car pulled up beside me.  The window was halfway down so I shouted, "What the **** do you mean blowing your horn at me."

The angel driving the vehicle turned toward me and smiled the sweetest smile this side of heaven and in a voice that was both courageous and kind, softly said, "That wasn't me.  It was someone behind me, and I don't think they were blowing at you."

He was wasting his breath, because I was caught in the rage storm I'd allowed to sweep over me.  I moved closer to his car, leaned down and put my face almost in the window and screamed some things I'm glad I don't remember.  Then, wonder of wonders, he smiled again.  That stopped the rage.  For the first time in all the years I've been an addict, I did not intimidate the person I directed my rage toward.  And for the first time, the episode ended without running its course.

Then he gave me the way to conquer my addiction once and forever.  He gave me the insight I needed to write a thirteenth step, when with so much love I could feel it, he said, "You need to calm yourself."

The traffic began to move, and he drove slowly away as I stood in the street, speechless.  A few seconds later I jumped back into my run while watching him turn left at the next intersection and slide into a parking space that seemed to have appeared from nowhere.  As I ran through the intersection he got out of his car and saluted me.  With a smile on my face, I returned the salute and headed out of town, running easier than I've run in years.  As the miles slipped away, I mentally drafted the 13th Step - it goes like this:

13.  I know that I have the power to chose my state of mind, and I always choose calmness and serenity no matter what events or actions are taking place.  I understand that to work the thirteenth step requires constant vigilance, and I willingly accept that responsibility.