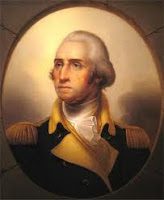 A little research revealed that there is a fair amount of dissention regarding whose birthday we’re celebrating today.  Wikipedia says it’s Washington’s birthday.  On the other hand, the U.S. Parks Service says it’s a day set aside to celebrate both George Washington's and Abraham Lincoln’s birthdays.  Then there’s the fair state of Alabama, my home state, which officially celebrates the day as George Washington, Thomas Jefferson Day.
I’m going to go with Washington and Lincoln, because I am thinking about them.  I invite you to take a minute or two and join me in those thoughts.  This country would not exist had not each of them appeared when they did or had either of them failed to act as they did.
In the beginning, before there was a United States, there existed a group of colonies who were very wealthy but practically powerless.  A few of the richest members of those colonies were incensed at the amount of money they paid to the king who had set them up in business.  Determining to do something about their situation, they convinced one of their numbers, George Washington, to put together a ragtag army and take on their oppressor – the King of England.  Then, the men who recruited Washington to fight for them, failed to support him monetarily, or in any other way that mattered.  That pretty much took away his home field advantage.
The fact that George Washington, with little or no help from anyone, did in fact win the war, is a tribute to the power of his conviction, intention, and ability to motivate – being in the right place at the right time didn’t hurt anything either.  However, winning the war and freedom from England wasn’t George Washington’s greatest gift to America.  It’s what he didn’t do that made the United States what it is today.  George Washington went against the wishes of his supporters and constituents by refusing to become the King of America.   That’s right.  The first Americans did not want a President.  They wanted a King.  Washington made it clear that the only way he would lead the country was as its President. 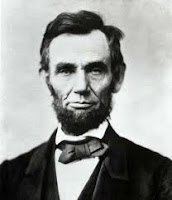 And what of Abraham Lincoln?  If you want to consider a bad job description, think of what the relatively unknown politician, and eight-time failure from Illinois was up against.  Half the country believed that slavery was acceptable, the other half believed it wasn’t, and both sides were willing to kill anyone who opposed them.  Ultimately Abraham Lincoln reunited the country and, yes, it did cost him his life.
Washington created the United States as we know it, when he refused to become its king.  Lincoln saved it during the hour of its greatest peril when he followed his heart, knowing he could well lose his life.
The darkest hours this country has ever faced brought forth its two greatest leaders.
The world, not just America, owes them both more than we can imagine.  It’s fitting to consider them today, and every other day that brings a threat to the freedom of even one man, woman, or child on this planet.  It brings me a measure of peace to know that on at least two occasions in history, that threat itself has brought forth its resolution.
This is a perfect moment to consider a few of the words of President Abraham Lincoln, spoken at Gettysburg, Pennsylvania, November 19, 1863 -------
“It is for us the living, rather, to be dedicated here to the unfinished work which they who fought here have thus far so nobly advanced. It is rather for us to be here dedicated to the great task remaining before us -- that from these honored dead we take increased devotion to that cause for which they gave the last full measure of devotion -- that we here highly resolve that these dead shall not have died in vain -- that this nation, under God, shall have a new birth of freedom -- and that government of the people, by the people, for the people, shall not perish from the earth.”