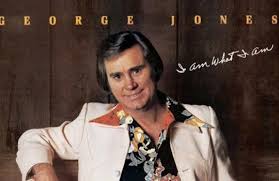 This will be the first of at least seven consecutive daily blogs.  It wasn't going to be the first.  In fact it wasn't even on my list of topics to blog about until I read Stephen Woodfin's tribute to George Jones.  He called it: What writers can learn from the greatest voice of all time:  George Jones

When I read Stephen's thoughts regarding George I decided to share mine, and since Stephen has already shared a video of my favorite George Jones song, I'll share one of my second favorite.  On second thought, after watching this a few times, it has now become my favorite:

I don't believe in "what if's" any more than I believe in coincidences, however, like any loyal Tammy Wynett, George Jones fan, I sometimes think about how much more fun their lives could have been, but then I quickly realize, that's true for everyone.

So, what does matter?  For me, it's going to sleep and knowing that if I had the day to do over I wouldn't do it any way other than the way that I did it.  Was that Tammy and George's experience?  On the surface, it appears the answer is no, but in fact, no one can know what is true for anyone else.


That's why comparisons and what if's are a waste of time.

Thanks George, Tammy, and Luciano:  You left the world a better place.