Monday, April 15th, I drove 140 miles from Huntsville to Marietta, Mississippi.  It was a beautiful spring day made even more beautiful by the 50 mile stretch of The Natchez Trace included in the trip.

I was almost an hour early for the scheduled picture sale at Marietta Day Care, a longtime customer of our small children's portrait company.  Reluctantly, I left the trace and turned right on Mississippi 371.  I'd traveled less than a mile when I happened to glance to my left, down a narrow paved road, and saw something I hadn't seen in at least fifty years: a man sitting atop a plow that was hitched behind a team of mules.  At 55 miles per hour, I did a double take, hit the brakes, and made a u-turn.

Minutes later, I pulled off the road next to the field where I discovered there were three teams of mules plowing, and a fourth team, unhitched from their plow, standing in the shade of a large oak tree overlooking the field.

Before I could get out of my vehicle, a new Ford crew cab pickup turned onto the road and stopped beside me.  I got out of my vehicle and walked to the truck.  I suspect I was babbling a bit when I blurted, "I haven't seen anything like that in more than fifty years."

The big man smiled and said, "Not many people plow with mules anymore..."  Then we talked a bit about old times and old values.  I heard a car approaching and knew the man had to go, so I quickly asked, "Is it alright if I take some pictures?"

Two of the men plowing were heading in my direction.  In less than a minute they were within talking distance.  They stopped at the end of the rows they were plowing, more to give the mules a breather than to talk, but one of them did tell me that three of them had been plowing since they were kids, and then he pointed toward the young man and said, "That's my boy.  He's into plowing with mules too, and I'm sure he'll pass it on to his sons."

We talked five, maybe ten minutes, and it was time for me to leave.  I thought about those four men and eight mules while I showed pictures of their neighbor's children to parents and grandparents, and I thought about them all the way back to Huntsville.

It was obvious the men could have plowed the field with John Deere tractors and done it quicker and maybe more efficiently.  But they decided a long time ago that the old fashioned way was their way.  It's hard to describe the feelings that welled up in me as I thought about those men and mules: feelings not related to farming but rather feelings of hope that maybe, just maybe, there are enough folks out there who understand what matters and are willing to keep it around for those of us who have lost touch with it to make a difference; a real difference.

I was anxious to tell Christina what I'd seen but I didn't have the opportunity.  I walked in the house and she said, "I understand you watched some mules and men plowing a field today."

As it turned out, I mentioned that I was from Huntsville, on the way to a day care in Marietta, where I would be showing portraits of children.  The man I talked to mentioned it to his son, who told his wife, Sonya, who is on staff at Mudpuddles, a nearby day care, that is also one of our customers.

Sonya called Christina and asked if I was working in Marietta.  When Christina said yes, Sonya told her that her husband, Delton, along with his father and two friends were plowing a  field near Marietta when I stopped to watch.

The next day, I called Sonya and asked her to send me some information on the foursome.

Sonya identified the men as,  Eddie Johnson (who I photographed only at a distance), her father-in-law and her husband, Delton.  She also noted that the man I talked to on the road was James Cheatham.  It was James' brother, Woody that I happened to get the most pictures of.  Then she told me this about them:

"Eddie Johnson is Delton's father.  He has been plowing with mules for over 60 years.  He was taught by his father and grandfather, beginning when he was five years old.  When Delton was five, Eddie began teaching him the art of plowing with mules, and it is an art.  Delton and his father logged with horses every summer until Delton finished high school.  Woody and James were also taught by their father and grandfathers and now pass the tradition on to their children.

Sonya, Delton, their boys, and all of our Mantachie and Marietta friends very geniously share their life with Christina, me, and Adrienne, our partner.   Theirs is a priceless gift, freely given, and accepted with humility and thanks.

Here's Delton, Sonya, and their two sons, Luke (standing) and Bryson (sitting).  One day, if I'm lucky, I'll glance down a Mississippi road and see Luke and Bryson plowing behind a couple of teams of Mississippi Mules. 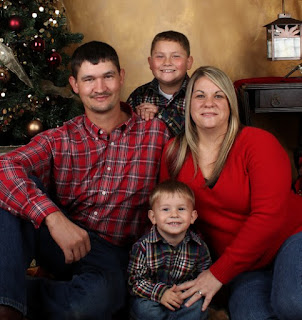