Searching in All the Wrong Places 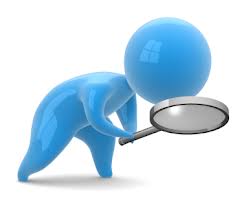 I always think that I'm going to have a lot of time to write when the weekend rolls around.  I always forget that weekends are when we get ready for next week's day-job portrait sales.

Years ago, before this day job was even a thought in my mind, I knew that I needed a way to carry my electronic desk and file cabinet with me.  My thinking was, if I have a computer that I can set up quickly, wherever I am, I'll be able to work anywhere anytime.  In theory, that's a wonderful idea.  In actuality, it hasn't worked out that way.  I could carry a computer without a hitch.  The problem was syncing the info in the mobile device with the info in the stay-at home device.

I tried everything I could think of and more than a few things that I didn't think of: schemes that were suggested by concerned, knowledgeable friends (there are a couple of contradictions in that description - I won't point them out because you already know what they are).   Once, many years ago, I tried some software that claimed to be able to access my home-based computer from my remote location.  At the time, my home-based computer was in Mentone, Alabama and my remote location was the Ramada Renaissance Hotel, just off Market Street, in downtown San Francisco.

The software connected after I resigned myself to the lag time factor - about a minute per key stroke.  I was finally rewarded when a view of my home-based desktop appeared on my laptop, three thousand miles removed.  Thirty minutes later, I managed to open the file folder I needed, and just as I was about the save the file on my laptop, the screen went blue.  Thirty seconds later my phone rang.  I answered and heard the breathless voice of my secretary, "Bert," she exclaimed, "I just came in your office, glanced at your computer, and someone was inside it."

She paused, and I began trying to think of a simple way to explain to her what was going on.  At the same time, I was mentally kicking myself for not advising her that I was going to try this new connection method.  Before I could get any words out, she regained her voice and exclaimed, "But don't worry.  I pulled the plug."

That story is much funnier to me today than it was twenty years ago.   A week or so ago, I realized that in twenty years I wasn't any closer to a solution than I had been the day the plug was pulled.  I have three laptops, each with Microsoft Outlook, three different versions by the way, none of which are synced with any other.  And, to compound my issue, I have Scrivener on each machine, and no book or blog is synced between even two of the laptops, much less all three.  And My Docs is three independent collections of files with only the remotest resemblance to each other.    I was staring at my iGoogle browser home screen, while considering yet another sync program that just might bring order to my chaos, when I noticed my Gmail reader in the middle of the desktop and finally, FINALLY, the light came on.

I've had a Gmail address since the beginning of Gmail, but I've seldom used it - in fact, it was set up automatically to forward my Gmail, through my server, and subsequently to my various out-of-sync Outlook programs.  In short order, I cleared 6,000+ messages out of the Gmail inbox and sent myself a test message.  I turned on one of my other laptops, opened Gmail and, wonder of wonders, there was my test message.   I tweaked everything,  found a colorful Gmail theme and purchased Adblock, a program that blogs the ads on the Gmail desktop.  Minutes later every past sync failure was forgotten.

Vernon Howard said, "The day that God answers your prayers is the day that you will forget all the times that he didn't."  Vernon, as usual, was right.

Gmail worked so great that I took Google Drive for a spin around the block.  I haven't returned from that test drive, and I doubt that I will.  Google Drive does for my documents exactly what Gmail does for my email.  Now, ten days after my discovery of Google's cloud and what it can do for me, I'm still marveling.

I've had comparable experiences to this one more times than I can count and in every area of my life.  I'll bet you have too.  Our problem is, we look for solutions but limit our search with our preconceived notion of what the solution has to look like.

I don't know about you, but I'm sure that its time for me to "pull the plug" on all the preconceived notions I'm still carrying around.