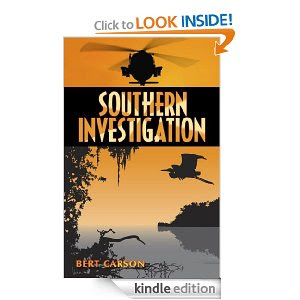 Once upon a time, there were almost two dozen reviews, all four and five stars, posted on the Southern Investigation review page - now many are gone - stripped by a ruthless algorithm.  They became collateral damage.

Amazon, concerned that many book reviews weren't the "real deal," built a algorithm to purge those that didn't meet their guidelines.  Thousands, maybe tens or even hundreds of thousands of reviews were stripped away - no author was excluded from the scrutiny of the algorithm.

After the bombing, it was discovered that many, in fact, way more than many of the reviews were, in fact, legitimate, honest reviews and should have never been removed.  They were collateral damage.  However, there's no going back on an algorithm that has run.

I didn't complain because, at the time, the action had no direct impact that I could see.  Now, however, I'm very close to publishing the second in the series, Southern Investigation - Tucson, and I want to run some paid advertisements for Southern Investigation to generate interest for the new release - unfortunately, the platforms I've chosen to run the ads have rejected my ads because I do not have the required number of reviews.  Explaining that I did have them and Amazon inadvertently stripped them away doesn't carry any weight.