The Stockholm Syndrome and You 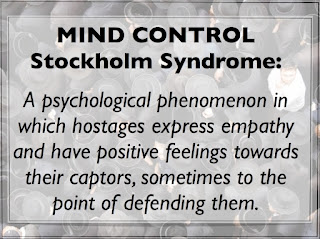 by Bert Carson
Wikipedia says this of the Stockholm Syndrome:
"...a psychological phenomenon in which hostages express empathy and sympathy and have positive feelings toward their captors or abusers, sometimes to the point of defending them, and sometimes the feeling of love for the captor shows.  These feelings are generally considered irrational in light of the danger or risk endured by the victims, who essentially mistake a lack of abuse from their captors for an act of kindness."

That and more is what Wikipedia says about Stockholm Syndrome.  Here's what I say.  For as long as I can remember, and that covers almost seventy years, I've been a student of all things esoteric.  Any serious study of the esoteric quickly involves research into the "ego," and there is no lack of information and opinion on the subject.  If you're curious, one of the best books I've found on the topic is The Book: On the Taboo Against Knowing Who You Are, by Alan Watts.

Ego is the collection of unproven 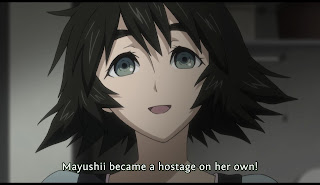 beliefs, third-party opinions, and biases that we weave and mold into something we call "our self" or "who I am."

I wasn't "who I am," and you weren't "your self" the moment you entered this human experience.  We were pure spirit, universal energy, encapsulated in a human body.  Our first reaction on discovering our dilemma was to scream and then cry.  The next few years were erased from our ego memory by our captors as they began indoctrinating us with the a new story - our "who I am" story. 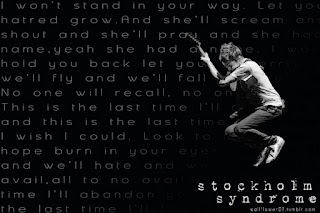 Consider this, with the exception of a few hard-wired details (gender being chief among them), the only difference between you and me or either of us and anyone else on the planet is the story we have accepted about who we are:  it's not only a story we've totally accepted, it's the story that runs every moment of our lives.  It determines every decision we make and every step we take: unless we see through it and remember the time before our capture.

We speak glibly of "freedom" yet until we free our self from the story our captors sold us, we are victims of the Stockholm Syndrome.