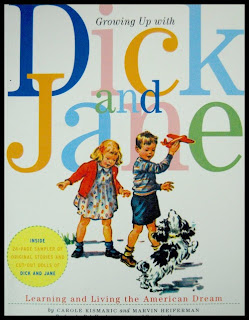 The following passage is both bad and boring, not normally what you would expect from a best seller:

However, this particular best selling series is the exception to Bert Carson Writing Rule One (which I haven't shared yet) because the long running (1930 - 1960's) Dick and Jane Series wasn't about writing.

Dick and Jane's objective was to teach us how to read using the Look-Say Method which worked, and would still be working today had Dick and Jane not landed in serious legal difficulty in the '60s.  Ultimately, they lost their final court battle to phonics.  Shortly thereafter, Dick and Jane and their dog, Spot, retired to Tahiti, bought a small inaccessible island, and today locals often report sighting the two children and Spot running along the beach and shouting:

The Tahiti part may be a myth, but the Dick and Jane story is absolute fact.  If you would like to know more, click here.

They also taught Ernest Hemingway, Beryl Markham, John Grisham, and Amanda Hocking to read and to write.  They taught Robert Crais also, and he used the reading skills they imparted to write this:

...even your bravest young man didn't stand there and die for little Sally back home or even for the Stars and Stripes.  If he stood at all, he stood for his buddies beside him.  His love for them, and fear of shame in their eyes, is what kept him fighting even after his sphincter let loose, and even when his world turned to hell. It took a special man to stand there all alone, without the weight of his buddies to anchor him in place, and Aimes was looking for young warriors that he could train to move and fight and win alone.  Die alone, too, if that's what it took, and not just any man was up to that.  But poets were different.  You could take a poet and fill his heart with the notions of duty and honor, and sometimes, if you were very lucky, that was enough.  Aimes had learned long ago, perhaps even in an earlier life, that a poet would die for a rose."  from L.A. Requiem by Robert Crais

Thanks, Dick, Jane, and Spot, we owe you a debt that is too enormous to define.  A debt that can be repaid only through using the skills you taught us.

Writing - Bert Carson's Rule One: before you can write, you must learn to read.  When you've mastered the basics of reading, you must continue to read, and read, and read.  You cannot write if you do not read.