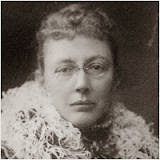 Agnes was a writer, primarily an essayist.  At age twenty, her first work was published.  I didn't read it.  In fact, I  heard of Agnes only because Neil Gaiman knows her work and published an excerpt from her book, Time and Tendencies, at the beginning of Chapter 12 of American Gods.

While I'm confessing, I might as well come clean about me and Neil Gaiman, then I'll do a dozen Hail Hemmingways, and move on to the point.  I only found Gaiman because he showed up on TWSBI's Facebook page.  I knew he was an author, so I followed him to the 10th anniversary edition of American Gods, bought it, and now I'm hooked on the classic that I missed when it was published fourteen years ago.

Here's the Agnes Repplier quote that Gaiman inserted at the beginning of Chapter 12:

"America has invested her religion as well as her morality in sound income-paying securities.  She has adopted the unassailable position of a nation blessed because it deserves to blessed; and her sons, whatever other theologies they may affect or disregard, subscribe unreservedly to this national creed."   from Times and Tendencies

My next stop was to find Times and Tendencies, which is long out of print.  However, I located a copy at a bookstore in Rhode Island, thanks to Abebooks, and now its mine.  Then I searched some more and found her essay, Words.  Agnes wrote it in 1939.  It's twelve pages long, so I didn't figure many people would be interested in reading it unless they knew it would be worthwhile - a condition imposed by the sheer weight of the data we have to wade through daily.  So I highlighted the parts I figured would get your attention and pasted them below, along with a link to the full essay.  Enjoy Agnes Repplier, an independent rebellious author from another time, with a message that is timeless.