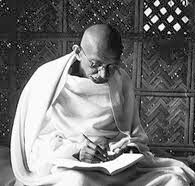 There are Mahatma Gandhi stories on most any topic of human relations you can think of.  This is one of my favorites.  A woman, with her young son, waited for hours for an audience with Gandhi.

Finally it was her turn.  Hanging onto her son, she approached the revered one and blurted, "Master, tell him to stop eating sugar."

Gandhi considered her request for a long time.  Finally he looked at her and said, "Return in two weeks madam."

She was too dumbfounded to speak and before she could find her voice, Gandhi was gone.

However, as instructed, she returned in two weeks.  This time she was quickly ushered into the sage's presence, whereupon she repeated her request, "Master, tell him to stop eating sugar."

Without hesitation Gandhi turned to the boy and said, "Stop eating sugar."

The boy indicated that he would do as he had been told.  His mother, beaming at their exchange, timidly raised her hand.  Gandhi nodded at her and in a soft voice she said, "Master, why didn't you tell him that when we were here two weeks ago."

I love that story.  However, about now you might be wondering how it relates to the blog title, "Gandhi on Writing."  Here's how.  For a long time, my in-basket has been crammed with uninvited links to blogs that  assure me they will teach me how to become a writer if I will only click here.  They have one thing in common, well, two actually.  First, they are written by people who don't have a clue how to write and second, or maybe it's just an amplification of the first point, without exception the blogs are poorly written.

Gandhi would not tell the young boy to stop eating sugar until he stopped  eating sugar.  Self-titled "best selling" authors who haven't sold anything except their writing courses could learn a lesson from Mahatma Gandhi, and I fervently hope they do.