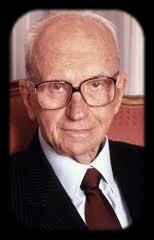 I ended yesterday’s blog, Wichita Lineman, with a note that today I would post a blog about James Michener, the legendary author of more than forty books, published over a fifty year period, beginning in 1947 with the publication of Tales of the South Pacific.  That book was also the basis for South Pacific, the Broadway musical and South Pacific the movie.  That’s a nice way to start a writing career.

In a way, this is the Michener blog I promised, it’s just not about what I thought I would write about.  On the way to writing about a couple of Michener’s writing techniques, I was waylaid by my wife, author Christina Carson, and another author, JA Konrath.  To be honest, J.A. doesn’t know anything about this.  The waylaid part came when Christina said; “You need to read JA’s latest blog.”

With no thought about the Michener blog, I began reading Konrath’s December 23rd post.  If you haven’t read it yet, don’t miss it.  When I got to this passage: 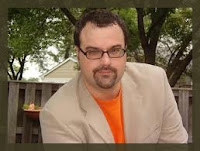 I've lived long enough to see my advice become obsolete, and that gives me hope for the future.
Back when I began, this business was all about finding an agent, finding a publisher, then doing whatever you could to promote yourself.
This blog spoke at length about social media, and book tours, and partnering with your publisher.
Things have changed.
I have 10,000 followers on Twitter, but I only use it occasionally  Facebook? Haven't been on there in eight months. I witnessed the rise and fall of MySpace. I've opted out of Google+ because I saw no benefits. LinkedIn? I can't even remember my password.
I'll never do another book tour. I doubt I'll ever do another official booksigning. I've stopped speaking in public, stopped attending events. Once it was important to meet fans and network with peers. Now I can do that just fine via email.

I  realized that it dovetailed with something I read last night.  Michener said in a 1994 letter to his friend, Lawrence Grobel, author of Conversations with Michener, “Publishing has galloped off in directions I cannot follow.  I am satisfied to be eighty-eight rather than fifty-eight.”

Later in the letter he elaborated with this statement, “The specific changes that concern the writer are the wild, almost cyclonic rearrangements of publishing houses, the selling out to conglomerates, the fusions of once independent companies and, especially, the torrent of changes in the editorial staffs of the surviving companies.  That’s where the bite comes, that’s where the beginning writer faces his greatest danger.”

Michener typed his books on a manual typewriter.  He didn’t even suspect eBooks were in our future, though they've been a promise of technology for many years.  However, he saw the turmoil in the publishing business and accurately predicted the effect it would have on writers.

In 2007, eBooks exploded into our lives with the introduction of the first Kindle.

Legacy publishers, thanks to their own shortsightedness  and self-focus, were an easy target for the new technology.  They will always be with us, but they will never occupy the position they held in Michener’s heyday.
History is full of people who read the handwriting on the wall.  Now, five years after Amazon sold the first Kindle, there are thousands of people saying, “I knew that was going to happen.”  JA Konrath did more than talk.  He sailed with the first tide, though he had no guarantee that he would survive the voyage.

As it happened, he sailed at the perfect moment.  He isn't the only one, but to know my knowledge, he is the only one who has made a point of sharing everything he has encountered that he believes will make every writer’s voyage easier, more profitable, and a lot more fun.

So, my intention in this blog has shifted from sharing Michener’s techniques to commending him for his magnificent body of work, noting his accurate prediction of the condition of the publishing industry, and subsequently predicting the effect of that condition on every author, and then I’d like to thank JA Konrath for helping every writer who needs a hand.

I think Lulu’s, 1967 number one song, To Sir With Love, is a fitting tribute for Michener and Konrath.

Tomorrows post is called To A standard, and I’ll use this Rockwell painting to illustrate it. – yep it will be about football and it will also be about writing: 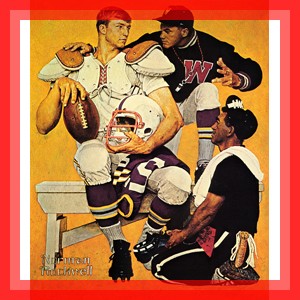