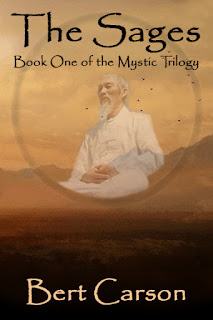 A serialization of The Sages: Book One of the Mystic Trilogy
The Mystic Trilogy Series is three volumes, recorded by Joseph Sanders, a native of Oklahoma, who chose to commit his life to learning and living universal truth. The books are neither fiction nor non-fiction. The Mystic Trilogy is what you would have it be.

Episode Thirteen
I finished my walk-around of the ship, which included every deck, and the wharf, and extended to the office of Zhen Zheng, the Harbor Master, an old friend. As soon as I entered the office, he greeted me with great enthusiasm, as he did every time we arrived at Phu Quoc.
Zhen Zheng, a Chinese National, who had moved to Vietnam with his new bride thirty years ago, suspected there was more to the Celestial Navigator than just another tramp freighter sailing the world. In fact, he knew there was more, he just couldn’t figure out what it was, and he was too polite to ask.
The Celestial Navigator has docked at Pho Quoc, at least once, and sometimes two times per year, for seventy-five years. For almost forty of those years, Zhen Zheng had been working in the Harbor Master’s office and for the past ten he had been the Harbor Master. Not only has he seen the ship at least thirty times, he had met with ten different Masters of the Celestial Navigator. The turn over in commanding officers had to have brought up questions in his mind, though he had never asked a single one.
We talked for a while, just general conversation, then he glanced at his watch, and I knew general conversation was over. I made a move to stand, and he said, “One more moment, Captain Sanders.”  continue
- January 15, 2013