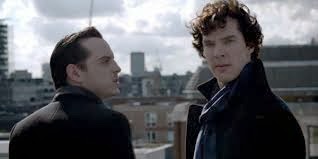 Do not be afraid - there are no series spoilers here, at least not from me.  The writers of the series have already taken care of the spoiling.

The much touted series' second season debuted in Great Britain a month ago and  in the U.S. a week ago.  I would have posted this sooner, but I've been in shock.  My shock wasn't brought on by the discovery that Sherlock was still alive.  I already knew that.  The shock came from the discovery that screen plays are now being written by a group of demented squirrels from Pisgah, Alabama.  That's upsetting to me because it gives Alabama a bad name.  I could live with that if I didn't know those squirrels can write a little better than they did in the second season premier episode.

It is always slightly disconcerting to be reminded that writers, directors, and producer  who have a show winner will still take it out behind the barn and tweak it a bit; just for the hell of it is all I can figure.   Maybe it's a knee-jerk left over from all the series they were part of that weren't winners.  Or maybe they have a self-destructive gene that doesn't allow success.  Or maybe they just like the Pisgah squirrels—of course, if that's the case they could just send the boys a case a peanuts. They didn't have to blow a winner of a TV show.  By my reckoning, the creators and producers of the show have hammered so much much money into marketing it, it won't die this season, or maybe not next season, but eventually, if the Pisgah squirrels continue to write the scripts, it's a goner.

There's a lot to be learned from Dick Wolfe, who resisted the temptation to tweak Law and Order, the all-time winner of a television show for eighteen years.  However, eventually squirrel fever even got Dick.  In 2008, he promoted Jack McCoy from Assistant District Attorney to District Attorney and cast Linus Roache as Michael Cutter, to take McCoy's place.  The combination of removing McCoy, the best ever television Assistant District Attorney and replacing him with a Linus Roache, a distant relative of the Pisgah squirrels was the beginning of the end for the show, which officially arrived two years later.

Of course, not all those who make the decision to bring down the final curtain on a great television series  waste times with tweaks and Pisgah squirrels.  They just cancel it, no matter how great it is.  Here's a perfect example from the infinite number of examples available:


Only twelve episodes were produced.  However, if you like good writing, great acting and impeccable directing, you'll love them, I guarantee it. Did I mention there are, as of today, 15 Dresden Files Books, by Jim Butcher and each has whispersync if you get the Kindle version?