You Have Got To Be Kidding 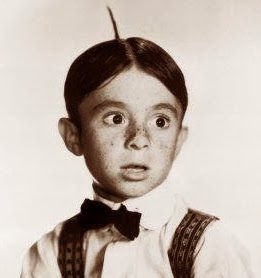 You probably don't remember Our Gang, from the early days of television and before those days, radio.  That being the case, let me identify the young lad on the left.  That's Alfalfa, one of Our Gang and that is pretty much a standard Alfalfa facial expression.

That's the same expression I had on my face when I saw the latest automotive creation of my school friends, Orean Brown and Henry Sanders.

Drag racing was in its infancy in the late fifties, but it had already captured a lot of our hearts.  Someone older than me, maybe a seventeen or eighteen year old, had gotten permission from the police department to set up a crude drag strip on one of the unused WWII runways at the local airport.

The first race was held on a Sunday afternoon, and all of the local entries, maybe a dozen street-legal and totally stock automobiles, had their doors blown off by the rather smug Chief of Police, driving his new Ford Police Interceptor.  What the chief didn't know was one of the young men he had beaten didn't give up easily.  Orean Brown came up with an idea that not many would have thought of, and he enlisted his best friend Henry Sanders to help implement it.

Every day and night of the week following the race, Orean and Henry worked.  They were about 90% done with the creation of Orean's brainchild late the following Saturday night.  They didn't have time to finish things the way Orean would have liked, but they rigged up a couple of things that would work for next day's race, and they rolled their creation out of the garage for a practice run.

They went up and down the deserted streets of Orean's neighborhood until they had their timing right and then they waited.  Sunday afternoon, we were all at the airport with no idea we were about to see the birth of a legend.  Frankly, we thought it would be a repeat of the previous week, and it was pretty obvious the chief felt that way also.  He had pulled his freshly washed cruiser to the newly painted start line, and he was leaning against the car waiting to see who would be brave enough to crank up and pull to the start line beside him.

All the guys who had been beaten a week earlier were standing beside their cars.  None of them were anxious to be the chief's first victim.  Then we heard the noise of an un-muffled car approaching.  It was a long way from the highway to the backside of the airport where we waited.  We listened to the approaching car for some time before it finally came into view.  When it did, we all stared.  I shook my head and refocused.  The car was still there and so was the Alfafa look on my face.

The driver was Orean Brown, the passenger, Henry Sanders.  The car was Orean's Mercury, a  victim of the chief a week earlier. The two friends had spent the entire week removing the body from the 1953 V8 powered, standard shift, sedan, thereby reducing its weight by roughly 50%.

The 10% of the project they failed to complete was finding and installing a windshield and accelerator linkage.

they resolved the second with a long piece of piano wire.  One end of the wire was fastened to the carburetor, the other end was in Henry's hand.

Without a word to anyone, which is understandable, since you couldn't hear above the noise of the exhaust, Orean pulled up to the starting line, looked at the chief then slowly turned and looked down the runway toward the distant pine trees and extended his arm like Chief Crazy Horse leading his men into battle.

If the chief had thought about it, I'm sure he wouldn't have done what he did next.  But he didn't think.  Consumed by the challenge, he threw away his cigarette, wrenched opened the door and somehow managed to get his tall frame in the cruiser in record time.  He fired up the police interceptor engine, and without giving Orean any warning, engaged the clutch and roared away in a blue cloud of burning tax payer financed rubber.

Orean reacted quickly, dumping the clutch and screaming away in his own blue rubber smoke.  In the first couple of seconds, he cut the gap between his car and the police cruiser in half.  Then, above all the noise of the two vehicles speeding away, I heard something I'll never forget.  Orean, shouting as loud as he could, screamed "Now," and Henry, in perfect sync leaned forward, releasing the tension in the wire connected to the carburetor.  Orean slammed the body-less Mercury into second and screamed again, "NOW!," and Henry straightened pulling the wire to the accelerator tight.  The Mercury seemed to take wings.

The next time Orean screamed, "NOW!" he and Henry had pulled even with the chief.  When he said it again, Henry straightened, pulled the wire tight and the race was all but over.  The chief was beaten.  A couple of days later the police department announced that for safety reasons there would be no more drag racing at the airport—we all knew the real reason. I know two things about legends.  They are all rooted in history, and they never die.  I just told you of the day that Orean Brown became a drag racing legend.  And I'll guarantee you this, though he's gone, the legend of Orean Brown, Henry Sanders, and loud shouts of "Now," will never fade.  After all, it's always NOW!