On Changing My Profile I just finished editing my blog profile.  The change I made wasn't a big one.  I changed the number 72 to 73.  See "About Me" in the right column.  I've been meaning to make that change since September 9th, my birthday, but for a number of unimportant reasons, I'm just getting around to it.

The biggest obstacle to making the change was remembering how to do it.  I'm not an IT guy, and by that I mean I don't do enough of it to remember the procedure from one application of it to the next.  My IT weakness is further complicated by the rapidly changing field of computer technology. 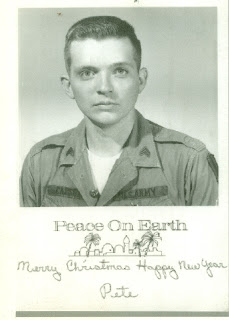 So what does the change of one year mean, besides a change in my Google Profile.  Not much as far as I can see, which is a very long way from this 73 year tall vantage point.  What I'm getting at is, I've come to believe that a birthday isn't a defining event.  You see, I still think like that six year old in the picture, and people who know me will confirm that more often than not I act like a six year old.

So what is a defining event?  You won't find this definition in the dictionary since I just made it up.  I believe a defining event is one whose effects on the person being defined cannot be undone.  I'm not talking about breaking up with your first sweetheart, or failing high school algebra, or remembering where you were when you heard that ___________ (you fill in the blank), I'm talking traumatic events like the death of your most beloved relative, your marriage (the first one), your divorce (also the first one), or participating in a war (any war, any level of participation). 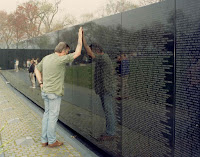 Since I've done all of those things, I've come to the conclusion that for everyone there is a principle defining event.  That is, there is one event that overshadows all of the rest.  That event cannot be changed by participation in a support group, an infinite number of sessions with a psychologist or psychiatrist, or by consuming countless gallons of alcohol or some other drug of choice.  The effects of that event overshadow all others and become the heart of your profile.  After you experience that event, you have no idea who or what you would have been had that event not occurred.  It cannot be changed - period. However, no matter what physical changes the years bring.  No matter what personality
changes, the defining event is responsible for, the six year old inside you is still alive and well.  My buddy, M.D. Brown, who was an infantryman with the 25th Infantry Division told me and everyone present at a meeting of Vietnam Veterans, "Going to Vietnam didn't change me and it didn't change you.  It just amplified who we already were."  I've thought about that a lot since he said it, almost twenty years ago, and I've come to believe he hit that nail right on the head.

Remember this, you aren't your defining event.  You are who you always have been.  Celebrate that.