Energy - The Force Behind Thunderstorm Storms and Bestsellers 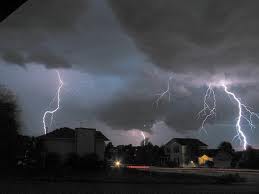 It wasn't until I began taking flying lessons that I started to notice, as in "learn about," weather.  The one line, and the only line, that I remember from the Cessna basic flying book is, "All weather is the product of temperature change."

As I pondered that statement, I realized that if it were true, meteorology was at best an educated guess.  I thought about it again this morning at 6 AM when a thunderstorm rolled through my neighborhood.  Judging from its velocity and volume, I'd say it's a safe bet to assume you also heard it, no matter where you live - at least that's the way it seemed to me at its height.

As it pounded through the neighborhood, with window shaking thunder, hurricane driven rain, and a monster strobe light display of lightening, I realized that the line I'd memorized more than forty years ago did not take into account a simple fact - a storm can, and often does, become an independent energy generating force.  In other words, rather than dying out, some storms generate the very energy that feeds their growth.  You can't predict that no matter how many thermometers you've spread across the face of the land.

Energy is the building block of the universe, but it's not a static, measurable, force - at least not all of the time.  Take the energy of people, for example.  Every person has an energy field.  Their field is generated first by their  basic physical condition, and then amplified or dampened by their attitude.  Now, let's make up an energy measurement and call it "personal energy."  Taking the analogy a bit further, let's say that the average person has a personal energy level of 80, the sum of their physical condition energy level and their attitude, or psychic energy level.

Now, what happens when a group of average people, say 100 of them, get together?  Nothing much.  The group energy level holds at 80.  Then a person who has just read a great book, passed algebra when he didn't expect to, or has just scratched the wax off the winning number in the Georgia Lottery, joins the group.  That's a no brainer.  The group energy level goes up, temporarily, and falls back down.  But what if, just as the group energy peaked, another person, who has read the same book appears?  The energy climbs even higher, and before it can drop, a third excited reader joins the group. Before you can say "Amazon Book of the Year," you have a Malcolm Gladwell "tipping point" and a bestseller is born.

The energy that causes thunderstorms is identical to the energy that powers bestsellers.  No one knows when either will appear.  I'm no meteorologist, but I am a writer, and I know that if a writer keeps writing, one day, one of his or her works will tip over the bestseller energy threshold and began generating its own energy.  The key isn't predicting when it will happen, or even what will make it happen.  The key is, keep writing, and know that it will happen.