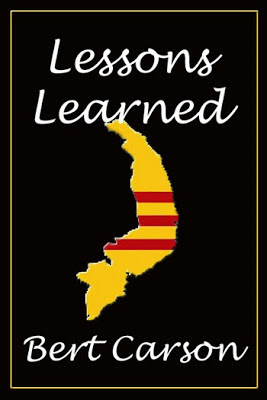 I just read F.C. Etier's blog post, Sex Scene in Seven Sentences, and the note that a writer could enter 8 sentences from a book on The Weekend Writing Warriors showcase contest.  Since I've just dropped out of the race for Pope, I decided to give it a shot, even though have less than two hours to to post the sentences and fill out the application.
So here goes.
The set up:
The lines are from Lessons Learned, a work in progress.  The book is written in first person.  The speaker is Sam Jordan, a 52-year-old, Vietnam Vet, writer.  The eight sentences are from a conversation between Sam and Sheriff Dan Smith.

The Eight Lines
Then he asked the first question every Vietnam Vet asks every Vietnam Vet he or she meets.
“When were you there?”
I told him that I’d pulled three consecutive tours, beginning in 1966, and added that I’d been with 182nd Assault Support Helicopter Company, better known as The Big Dogs, for all three of my tours.

"The first ten months we were at Camp Bearcat about thirty-five miles from Saigon. We were assigned to the the 214th Combat Aviation Battalion, and then we were transferred north.”
He whistled low and said, “Were you with The Big Dogs on the DMZ?”
I hesitated and then said, “Yep, I was there. How so you know about that?”
He stared into my eyes for a moment and pointed to his chest saying in a low voice, ”Alpha Company, 1/13 Regiment, 5th Marines. You guys were flying support for us.”