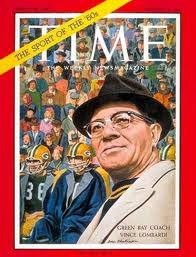 I have spent quite a few of my 70 years watching professional football.  I was raised in the South, and except for a stint in Vietnam, and a year in San Antonio, I've always lived there.  In the days before cable and satellite, there were only two professional football teams that I could get on my tiny TV, the Washington Redskins and whoever they were playing.

In spite of that, the Green Bay Packers were my favorite team.   Their quarterback, Bart Star played at the University of Alabama, and I studied the team to the point where I felt I knew all the players.  But, the real draw for me was their coach.  I loved, and still love, Vince Lombardi.  He was the Green Bay head coach from 1959 - 1967.  In 1969, "looking for a new challenge," he became the head coach of the Washington Redskins.

Two weeks before the 1969 season started, I was attending a four week corporate training session in Atlanta when I came into possession of a ticket to the Washington Redskin-Atlanta Falcon exhibition game.  I went to the game alone, found my seat near the top of the stadium, but with less than half the seats occupied, I immediately began working my way down toward the field, ending up on the fifty yard line fifty feet behind the Washington bench.  From my vantage point, I immediately noticed the Redskins were clearly having some trouble adjusting to the Lombardi Method.

Sonny Jurgensen, their quarterback, ten years into a sixteen year career, seemed to be having the most difficulty.  Sonny, a free spirit, was struggling in the face of Vince’s intensity.  Though the Hall of Fame bound quarterback had a splendid day, my memory of the game was watching Coach Lombardi moving up and down the sideline every time Washington had the ball.  On every play, he was shouting at Jurgensen, something the legendary quarterback wasn't used to - things like, "Sonny, you can't play with that beer gut; move it, move it, move it."  I had never seen Sonny play better than he did that day.  In fact, the '69 season was his best in years.

Vince Lombardi died at 57 just before the 1970 season started.   On several occasions following the '69 season, Sonny said that of all the coaches he played for, Vince was his favorite.  Once, I heard him say wistfully, "Sometimes I wonder what my career would have been like had I played every year for Coach Lombardi."

As far as I know, everyone who ever played for Lombardi, loved him, yet they all had stories about his intensity and drive toward the mastery of the basics of the game.  I didn't intend to include any stories beyond the one I just told, but another one just came to mind that illustrates the point I'm about to make regarding the Lombardi Method.  With a playoff game scheduled for the weekend, the coach of the team that was going to play Green Bay conducted a number of press conferences, taking every opportunity to blast Lombardi.  During the last one, he got caught up in the sound of his on voice and went overboard, announcing that his team would win if Lombardi didn't use some of his famous trick plays.

That was more than Vince, who had been unavailable for interviews, could stand.  Three days before the game, he held a press conference and announced that Green Bay would only use four different offensive plays during the game.  As he talked, he diagrammed each play on the white board at the front of the room.  They were each unique, and one could not be confused for another.   When he finished, he turned to the reporters and said, "I've sent a copy of each of these plays to their coach.  We will not run any play I haven't shown you and him."

On Sunday afternoon, Green Bay scored on each of their first five possessions, and their opponent scored only once, and that came late in the fourth quarter.  After the final horn sounded, Vince never mentioned the game again.  There was nothing left to say.

Vince Lombardi had a work ethic that was unmatched in football and in business.  He believed in practicing the basics until they could be executed with perfection over and over again.  And, though he said many things that could be applied to authors, one thing that he said that has served me well in many situations when I doubted I could move forward another step was, "The only way I can reconcile a loss is if I know that if we had stayed on the field long enough, we would have won."

I’ve done many in my life, and without reservation or thought I can say that writing is the most difficult job I’ve taken on.  When the going is the toughest, when I wonder if I'm wasting my time, when thoughts of quitting approach on the western horizon, and there is no light in the east, I close my eyes and hear Coach Lombardi shouting at me from the sidelines, urging me on.  When I glance over, there he is motioning toward the distant goal line, and shouting, "Carson, get your ass in gear.  You can do this.  I know you can."

Then through the sweat and grime of effort, with his words echoing through my wasted brain, I suck it up one more time, and move out, heading for my goal.