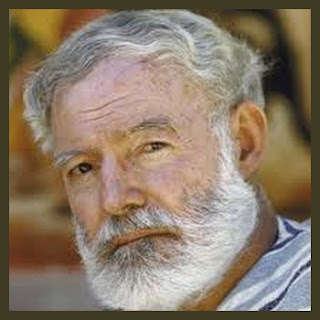 I suspect the majority of people on the planet only come close to death once, and that is the end.

Coming close to death was a constant theme in Ernest Hemingway's life.  It wasn't that he was jinxed, or cursed; it's just that he chose to put himself in harm's way, and then wrote a book or a few stories based on the experience.

First, fresh out of high school, he volunteered to drive an ambulance in Italy during WWI.  A few months into his tour, he was severely wounded and evacuated to the states.

He reported on the Spanish Civil War, from Spain, and during WWII he reported on the Normandy Invasion from the beach at Normandy, and the Invasion of Paris, from Paris.  Some years later, he participated in two plane crashes while in Africa, suffering serious injuries in both events.

He wrote 7 novels and 4 short story collections, changing the style of literature with his economical, understated style.  In 1954, he won the Nobel Prize in Literature.

I titled this post, Writing Like Hemingway.  I'm not suggesting that you spend your life challenging fate with your willingness to experience life threatening situations in order to write about them.  And, I'm not suggesting that you try to copy Hemingway's style and understatement.  I am saying that it would behoove all of us who write to do so with the dedication and commitment of Ernest Hemingway.