For Pope - A New Choice 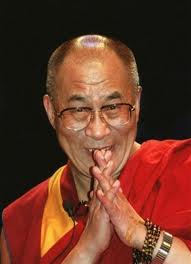 As many of you know, after a lot of meditation and serious soul searching, I've withdrawn from the race for Pope.  Now, as is the custom among those who withdraw from a campaign prior to the election, I've decided to give the Cardinals who had planned to vote for me as Pope another choice.

I've meditated and done a lot of soul searching, again, and chosen my successor for the office of Pope.  I won't keep you in suspense any longer.  I've asked all the members of the College of Cardinals who intended to cast their ballots for me, to vote instead for the Dali Lama.

I'm fully aware that the Dali Lama isn't Catholic, few Tibetan Buddhists are.  But face it, he had forgotten that he was the Dali Lama until he was reminded and then he picked it up and ran with it.   Learning Catholicism will be a piece of cake compared to what this man has already learned.

I've also considered all of the issues that the new Pope will have to deal with, and I'm totally convinced that a spiritual leader who overcame China can overcome a few irate Cardinals without breaking a sweat.

But the big reason I'm asking the College of Cardinals to support the Dali Lama is, he is the physical embodiment of everything that Catholics, Christians, Muslims, and Jews claim to be.