If Elected, I Will Not Serve - as Pope 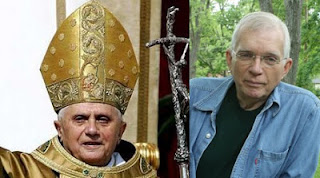 I have heard a reliable report from a source that I will not, for obvious reasons identify, that Tuesday afternoon, the College of Cardinals will nominate and unanimously elect me Pope.  I've spent a lot of time, at least twenty minutes, considering that possibility.   After the lengthy contemplation I've decided that if I am elected, I will not serve.

I know that the task before the Cardinals is overwhelming and shouldn't be taken lightly.  And I also know that the Pope's job is demanding.  Think about just this aspect of it:  He is responsible for praying for a billion souls every day.  I'm not sure, but I think a few key players have been left off his list, but still, a billion souls are a lot to be praying for.

Be that as it may, I'm not afraid of hard work.  I'm going to withdraw from the election for others reasons.  In no particular order, they are:


I have a purpose in writing this post, besides letting my sense of humor out for a walk on a beautiful day.  Two unrelated thoughts clashed in head Friday, as I was meditating over a spinach burrito.  The first was the upcoming election of a Pope and the second was General William Sherman's statement, on learning that was being considered for the Republican nomination for President, "I will not accept if nominated and will not serve if elected."

From that collision of thoughts, another idea was born, as is often the case in my mind, which operates like an atom smasher.  The new thought was, lets pass a requirement that every Senator, Congressman, and President, of the United States, takes this oath when they are sworn in:

Now that I've been elected by the people, I do solemnly vow to never serve them, answer to them, or do anything that might be construed as service in the public interest.  From this day forward, be advised, I only have two objectives: The first is to gather to myself as much personal power as possible, and the second, like unto it, gather to myself as much personal wealth as possible.

With one simple blog post I've saved the College of Cardinals a lot of time, and I've made it clear to the population of the United States that it is wasting its time looking to Washington for solutions to the problems, we as a nation have, that were created there.

Now, with that out of the way, take some advise from my friend, Sam Charif, owner and director of Pink & Blue Daycare in Helena, Alabama - "Children, it is too pretty to be inside.  Let's go out and play."