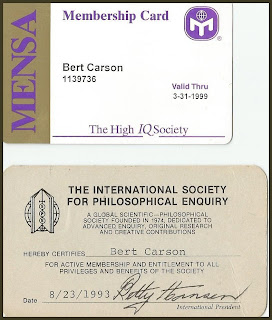 Long ago and far away, I took a Psychology course at St. Johns River Junior College.  All I remember about it was taking a standard IQ test sometime during the final week.  The day after the test, the instructor told me I should join Mensa.  I didn't know what Mensa was and wasn't inclined to find out.

Many years later, I discovered Isaac Asimov. It was love at first read.  After blowing through two or three of his books I did some research and discovered that he was a mover and shaker in Mensa.  I recalled the suggestion that I join Mensa and I decided to do it.

I quickly discovered that you don't just join Mensa.  You pay ten dollars, take a test, and if you are at or above the 98th percentile then you can join.  I took the test.  Qualified. Paid my dues and joined up.  A couple of weeks later, I received a letter from The International Society for Philosophical Enquiry informing me that I qualified for admission to their organization, whose admission standards are higher than Mensa's.  So I joined up with them.

I attended one Mensa meeting and let my membership expire.  I remained active in ISPE for a number of years, ran out of discretionary time, and let that membership expire also.  Carrying those two membership cards didn't keep me from doing fewer dumb things, nor did it make me more aware.  No one asked for my autograph because I was a member of Mensa.  I considered listing the two organizations on my CV, and then I thought about making an announcement on my business cards.  Something simple, like:

But, I didn't do that because I realized at an early age, credentials are nothing.  What one does is all that matters, or, to be accurate, how one does what they do is everything.

Are you a writer?  Letting the world know that you are a "best selling author," or a "PhD," or a "MSU," doesn't change a word, paragraph, or chapter of your writing.

You don't need credentials to write - you do need heart, commitment, passion, intensity, humor, understanding, and willingness to work impossibly long hours, most of which occur long after everyone else has gone to bed - and you had better have been called to the task by something higher than the desire to make a lot of money.   Neither a high IQ or fifteen degrees or a multitude of awards will make you an author.

I have a sticker affixed to the cover of my old pilot log book.  I put it there to remind me of a truth that applies equally to everything I choose to do.  It says:

"Don't get hypnotized by your own propeller."