Writing - Find The Ones Who Will 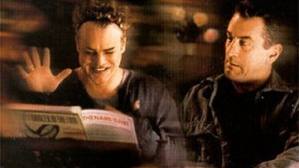 This is the first of at least eight blog posts for writers - or anyone else who chooses to read them.  In fact, though I'm going to tell a story and make a point in each of the posts, the subject could just as easily apply to writers as non-writers.  Come along for the ride.  I promise you will find something entertaining, and maybe something that will generate a big aha.

After the Academy Award Presentations, the last I will ever spend an evening watching, as I suspect might also be true for Steven Spielberg and Daniel Day-Lewis, I Goggled Philip Seymour Hoffman, because he was nominated for an Oscar, and I found a movie I'd forgotten, Flawless starring him and Robert De Niro.

Walt, in his stroke-impaired voice, haltingly says, "I'm afraid no one will sleep with me."

Rusty, places his hand over Walt's, looks in his eyes, and says, "Honey, some won't.  But, some will.  Your job is to find those who will."

It is estimated that there are 700,000 independent writers in the world.  Every one of us has the writer's version of Walt's fear - no one will read my books.  We have to remember that some won't and there's nothing we can do to change that.  We also have to remember that some will and our business, after writing and publishing our books, is to find those who will.
- March 23, 2013