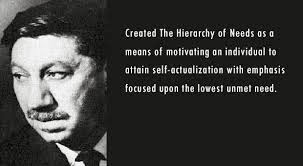 Abraham Maslow was a Humanistic psychologist, teacher and writer.  In his famous 1943 paper, A Theory of Human Motivation, he stated his belief that every person has a strong desire to realize his or her full potential, a level he referred to as self-actualization.

Maslow studied individuals that he determined to be self-actualized and noted: Self-actualizing people tend to focus on problems outside themselves; have a clear sense of what is true and what is false; are spontaneous and creative; and are not bound too strictly by social conventions.

He also created what came to be called Maslow’s Hierarchy of Needs.  Odds are that you've encountered the famous Maslow Hierarchy Pyramid.  In its basic form, it maintains that there are five levels of need, each of which must be satisfied on the journey to self-actualization.  Here is a look at a simplified version. 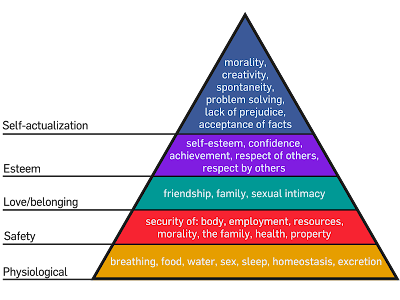 Through the years many, including Maslow himself, have added to his body of work.  Few have found fault with it, and I'm not going to step out of the crowd and shout, "Hey, that isn't right."

However, I'm going to say this, from a writer's point of view, Maslow's Hierarchy of Needs, is all well and good, but it doesn't amount to anything unless it's sitting an essential base that I call Belief, Commitment, Perseverance.

A writer who doesn't believe in him or herself, who isn't committed to their writing success, or isn't willing to persevere against all obstacles on the path, will never be a self-actualized writer.  Better to hang it up early and join the horde on the road to non-self-actualization, a much more popular and care-free path to travel.