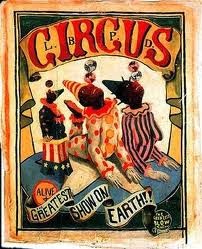 My good friend Caleb Pirtle just finished a six-part blog series about his week with the Circus. It's a fantastic adventure, and like all true adventures, it's just as fresh for Caleb today as it was when he "joined the circus."

His adventure and subsequent sharing of it prompted this blog, but I'm not writing about Caleb's circus, I'm writing about mine, and yours, and John Croyle's.  However, before I get to that, here's a link to the first of the six posts that Caleb penned.  After you've read it, I'm betting that you will find the others.


On the road with madmen and god - by Caleb Pirtle

And now, the other circus, the one that came to your town and took you with it.  Or maybe you didn't join it, and you're waiting for it to come back next summer when you will.

I can't think of better place to start that story than by telling you about John Croyle's circus.  That's John on the left when he was #83 and played football for Bear Bryant at the University of Alabama .  And that's John on the right, with his wife Tee.  John Croyle knew his circus long before he went to Alabama and played football on the legendary teams of the early '70s.  He wanted to take care of children who, for whatever reason, were without a home.  Everyone knew John's dream, because he shared it with all that he came in contact with.

Just before graduation, John asked Coach Bryant's advice.  He told the coach he wanted to build his boy's ranch more than anything in the world, but he had no way to finance it.  He said that he had been drafted by the New York Giants and was willing to play for them for a few years in order to get the money he needed for the ranch.  Then he asked what the coach thought he should do.

When John shared that story with Christina and m, fifteen years ago, we all teared up.  Bear looked at John and said, "Son, you have a dream and it isn't to play professional football. It's to take care of boys who need taking care of.  You go back home, and you do that and everything will be fine."  The next few months were a Cinderella story, though at times it looked like the wicked step-mother would win.  Then things began to fall into place.  The last piece was a call from his friend, John Hannah who had promised, months before graduation, to send his signing bonus if the New England Patriots signed him.  He said he was calling to remind John of that pledge and to let him know that he had just mailed his $30,000.00 signing bonus to the fledgling boys ranch.

My all-time favorite book is Round the Bend, by Nevil Shute.  The story is a first person tale, told by Tom Cutter who, from the time he saw his first air show, wanted nothing else but to be part of it.  He followed the show day after day until finally he lost his job in the garage.  That didn't matter to Tom.  He kept following the show, taking a bus to the towns where it was appearing, working for nothing, and finally taking his father with him to appeal to the operator of the air show.  Here's the passage that tells of the meeting between Tom's dad and Sir Alan Cobham, the owner of the air show:

" Sir Alan told dad I was a smart boy but if I came I'd have to be laid off in the winter.  Dad said he thought it was best for me to do what I was keen on, and we'd take our chance about the winter.  Thinking back over my life, I know of two or three times when I've been just perfectly, radiantly happy.  That was one of them."

I believe everyone has a circus and I know that most people never join theirs.  But the good news is, it's never too late.  It may appear more difficult with the passing of time, but that is an illusion.  All you have to do is keep your circus alive in your mind until it shows up in your reality and then join up.