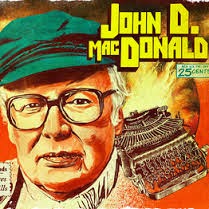 Samuel Johnson (1709-1784), was a British writer, essayist, and biographer.  One of his most memorable lines was, "No man but a blockhead ever wrote except for money."

I understand his thinking.  Writing isn't easy.  Sixty to eighty hour work weeks are nearer the norm than not.  Writing is a solitary activity.  Only a person with a vested interest (agent, publisher, etc.) ever calls to ask about the book. There is no instant success.  Some authors succeed sooner than others but none instantly.

So, do I believe that Samuel Johnson was right?  No, I do not. Understanding why someone says something and agreeing with it are two entirely different things.  I write because I cannot not write and furthermore, I believe that's why a lot of men and women write.

Yes, it is nice to know someone reads my work but even that's not why I write.  And yes, it would be great to sell a lot of books, though not for the reason(s) you might think.  If I sold a lot of books I would be able to write full-time instead of when I can fit it in.  That would be great.

Writing is art that can be learned, mastered, and gloried in.  What more is there to ask of one's art?  At age 71, I can see my writing getting better with every line.  I can't say that about everything I do.

So this "blockhead" will keep writing for the same reason John D. MacDonald gave, saying that his primary motivation in writing was neither money, nor fame, nor a drive for success: "I just enjoy the hell out of writing, and what gives me special joy are those moments when I write a page that is exactly right, that expresses precisely what I wished it to say."